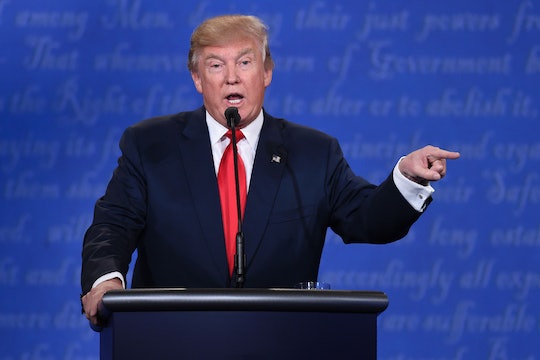 During the final presidential debate of the 2016 election season, moderator Chris Wallace asked nominees Hillary Clinton and Donald Trump to defend their individual stances on immigration. Trump was asked about his plan to build a wall along the US-Mexico border, and, in giving his answer, referred to (presumed criminal) immigrants as "some bad hombres." Reactions to Trump's "bad hombres" quote immediately started pouring in, likely because no one has heard such casually racist jargon since whatever folksy middle-aged white dudes they were forced to engage with in middle school.

Trump should have avoided taking the bait when Wallace not-so-subtly juxtaposed his plan for "securing the southern border" with Clinton's plan, which is...nothing. Because simply building walls is not how it works?

In his response, Trump said:

Aside from sounding like dialogue from some bad '80s shoot-em-up show, the phrase "we have some bad hombres here and we have to get 'em out" was only even barely covertly racist. It's almost as if he meant to blow a dog whistle to his like-minded voter base, but blew a rape whistle by accident, on television, during the final presidential debate. Tellingly, as soon as he'd finished his sentence, Hillary Clinton beamed, knowing she'd landed a shimmy-worthy moment. (She managed to restrain herself from actually shimmying, which is frankly more restraint than we deserve.)

The hashtag #badhombres began trending on Twitter globally within minutes. Plenty of people responded with jokes ("great band name!," "great knuckle tat!," etc.) and there's tons of fodder in there for this weekend's SNL. But just as many were legitimately angered by such an outrageously blatant show of bigotry at the final presidential debate.

The phrase was clearly off-the-cuff, but using that kind of language so casually arguably makes the offense worse. It signals that Trump hasn't done the cursory work of trimming racially incendiary, derogatory remarks out of his vocabulary to give his policy even the thinnest guise of legitimacy.