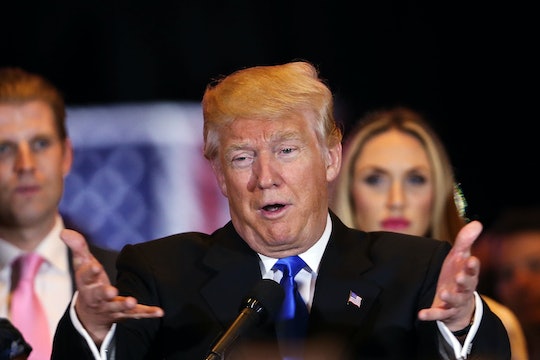 In honor of Cinco de Mayo, presidential candidate Donald Trump, master of diplomacy, posted a photo of himself eating a taco salad. He captioned it, "I love Hispanics!" Given his incendiary statements about the Latino community and Mexican immigrants, his attempt at capturing their hearts today isn't going too well. In fact, reactions to Trump's "I love Hispanics" tweet are hilarious, heartbreaking, and harsh.

The full post was simultaneously a shameless advertisement for Trump Tower fare and Trump's first step to winning the Latino vote (not). Face it: he knows a good marketing opportunity when he sees one. The snap shows him smiling terrifyingly, wearing his requisite flag pin, with one tiny thumb up. It appears he's in his office because behind him are photos of himself and a small collection of second-place golf trophies. The caption, in full, was: "Happy #CincoDeMayo! The best taco bowls are made in Trump Tower Grill. I love Hispanics!" Charming, no?

The good news is he's stopped saying "the Hispanics," but the bad news is everything else about this, ever. Interestingly, it appears that he's put his plate right on top of The New York Times, which is hardly the typical news source of choice for a Republican presidential candidate. That's not the only suspicious part of this photo. Some Twitter sleuths called Trump Tower Grill, and apparently taco salad isn't even on the menu. So where did this #CincoDeMayo meal come from?

That confusion was cleared up pretty quickly; apparently Trump just got the name of his own restaurant wrong. No surprises there. But that does not clear up the fact that a taco salad is just about the least Mexican thing you can order (and, putting that aside, the best ones are probably not at Trump Tower).

Nor does it address the fact that Trump owes so much of his rise in popularity to his opportunistic tactic of feeding into rampant racism and fear. He's demonized Latino immigrants by calling them "drug dealers" and "rapists," as well as accusing them of stealing U.S. jobs. It's no wonder that he has a 12 percent favorable and 77 percent unfavorable image among Hispanics.

It does, however, confirm that Trump knows little-to-nothing about Cinco de Mayo, Mexican history, Mexican culture, cultural sensitivity, tact, holding a fork, and irony. While Hillary Clinton is getting panned for pandering, Trump is hardly veiling his goal of winning over Hispanic voters. He's built his campaign on isolating and otherizing the Hispanic community, so he's definitely got an uphill battle. Without those votes, though, Trump does not stand much of a chance. So there may be more desperate backpedaling and offensive taco salad photos to come.