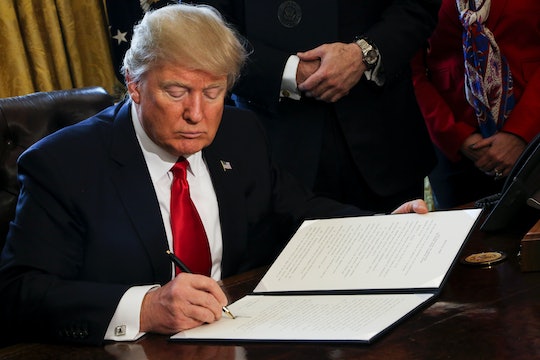 Why Trump's New Immigration Order Is Not Better

On Monday, the White House announced that President Donald Trump had signed a revised order regarding immigration restrictions. The order is expected to remove Iraq from the list of countries whose residents are temporarily banned from entering or acquiring visas, and it provides more specifics regarding those who are still not allowed to enter the United States, according to Bloomberg. Initial reactions from around the internet show how Trump's new immigration order is still discriminatory. The White House hasn't responded to Romper's request for comment regarding allegations that the new order still disproportionately targets Muslims.

Trump's initial executive order on immigration, which he signed shortly after taking office, was met not just with pushback from citizens, but from organizations like the American Civil Liberties Union. It very specifically laid out that individuals from seven nations — Iran, Iraq, Libya, Somalia, Sudan, Syria, and Yemen (all of which are Muslim-majority) — would not be allowed into the U.S. This restriction initially applied not just to those seeking refugee status, but to permanent legal residents and green card holders as well, according to USA Today. Through "extreme vetting," it was intended that Homeland Security would eventually allow individuals to enter the U.S. once they had been deemed to be free of any terrorist affiliations. Almost immediately after the original order was signed, chaos ensued in airports throughout the U.S., where people were being denied entry. Lawyers from the ACLU began working from airport terminals in order to help, and protestors crowded into airports in solidarity for those who had been detained. The ACLU has filed a lawsuit against the president as a result of the order.

Therefore, at least in part in response to the lawsuit, Trump has now signed a revised executive order regarding immigration which was released on Monday. That being said, there are only two major revisions, neither of which addresses the larger concerns that have led many to say that the order was, in effect, intended to be a "Muslim ban." The new order does not mention religion, but the public (and the ACLU) has not forgotten the original phrasing of the first order. As Quartz reported, the original order included a clause that stated the U.S. State Department should:

. . .prioritize refugee claims made by individuals on the basis of religious-based persecution, provided that the religion of the individual is a minority religion in the individual’s country of nationality.

In addition to changing some language, the new order removes Iraq from the list of nations entirely, taking it from seven to six. This gesture may have been something of a reward for Iraq from the U.S. in response to its "timely repatriation" of deported citizens, according to The Washington Post. The new order also provides a few exceptions for permanent residents, those who have already been granted refugee status, and individuals who hold dual-citizenship. As The Post pointed out, these exceptions may have been meant to exist in the previous version of the order, but were never explicitly stated, so there was a lot of confusion.

The new order will go into effect on March 16, and while it's not likely to cause as much chaos as its predecessor, the problems that many have with the order itself are long from over. In response to the announcement of the revised order, the ACLU tweeted out its continued dedication to exposing the bill's prejudice, and holding lawmakers — including the president — accountable:

The ACLU tracked the changes to the order's language and noticed that while the tone of the new version may be different, the intentions remain the same. The new bill supplements the word "activities" for "attacks," and removed several mentions of specific attacks, most notably several paragraphs about the Sept. 11, 2001 terror attacks.

The internet at-large responded immediately to the new order, and didn't seem particularly reassured by the slight change in tone, nor the adjustments made. The overarching sentiment is that the fundamental problems with the order still exist, and no amount of sugar-coating, justification, or pandering is going to change that.

Whatever the intention behind the revised order was supposed to be — whether to clarify the intent for U.S. citizens and foreign nations, protect the president from litigation, or both — there are still plenty of people ready to call a spade a spade: if it looks like prejudice, sounds like prejudice, and reads like prejudice, it's probably prejudice.