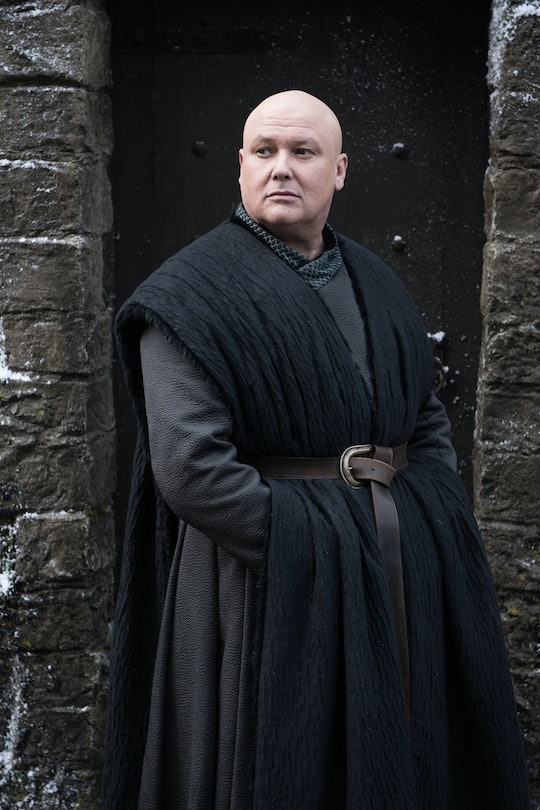 The Master of Whisperers has been a mainstay on Game of Thrones since the very beginning, but the penultimate episode of the series kicked off with his execution. Reactions to Varys' death on Game of Thrones prove that fans had something of a love/hate relationship with the conniving figure, though.

In recent episodes, he's been a fairly pure-intentioned character, but that wasn't always the case. So it's easy to see why Twitter is having a mixed response to his death. After all, Varys served Daenerys Targaryen nobly, believing, as most viewers did up until the final season, that the Breaker of Chains would reasonably and justly rule Westeros. But — whether fans like it or not — it seems inevitable at this point that the series is going to give Daenerys the Mad Queen edit. Varys, seeing the writing on the wall, decided to spread the news that Jon Snow was actually Aegon Targaryen and he had a rightful claim to the Iron Throne. The scene doesn't show to whom he's preparing a scroll with the information, but he sends it off nonetheless, and Tyrion informs Dany that she's been betrayed. He didn't even bother counseling leniency and Varys found himself on the receiving end of a white hot stream of dragon fire.

Just before Varys died, Tyrion fessed up that he was the one who told the Queen what he'd been up to. Varys, for his part, confided that he hoped he was wrong about Daenerys. He genuinely hoped she might become a force for good in the realm. But, just a few scenes later, it became abundantly clear that Dany would become Queen of the Ashes in the end. There wasn't much time for anyone to grieve or react to Varys' death, since Dany and her armies headed to King's Landing basically while his remains were still smoking. And Tyrion, despite begging Dany to back down if King's Landing surrendered, would soon come to learn that Varys had been right about her all along.

As fans pointed out, before Varys was in favor of a good queen and a just king ruling over Westeros, he was a pretty sneaky figure. He had, after all, served as the Master of Whisperers to various rulers for two decades — including the Mad King and Cersei. Did he believe he was working to serve the greater good when he betrayed beloved characters time and again? Yes. But was he also responsible for a bunch of deaths? Definitely. Some even argue that he's responsible for setting the whole series into motion, with that fateful whisper to Jon Arryn back in Season 1.

In the end, Varys was right about Daenerys, but the only people left to grapple with it are the ones who watched him burn and followed her into a brutal and unnecessary battle. Dany wound up killing many of her own men, even after King's Landing surrendered. It remains to be seen how the survivors will deal with their newly minted Mad Queen now.