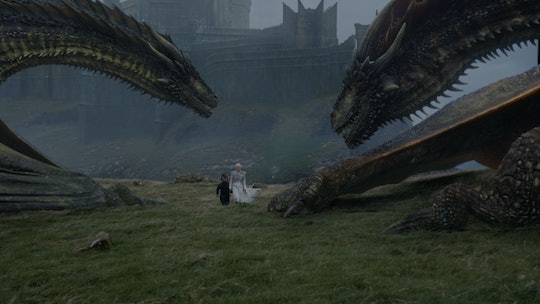 It looked like all was lost in the land beyond the Wall as the Night King's army converged on Jon and his men in Episode 6 of Game of Thrones Season 7, but Daenerys arrived with her dragons in the nick of time to lay waste to the dead. Unfortunately, not everyone survived the battle. A spear of ice cost one of the dragons his life, and reactions to Viserion dying on Game of Thrones prove fans are heartbroken.

Though perhaps not as heartbroken as Daenerys herself. As she said to Jon Snow following the grisly encounter, the dragons were the only children she would ever have. By hatching them in Drogo's fiery funeral pyre at the end of Season 1, Dany was reborn as a leader with a more clearly defined purpose, and her dragons were there with her every step of the way. She raised them from infancy. She relied on them to be there whenever she needed something incinerated. She may have two dragons left, but this loss will likely hit her very hard. She's going to be more determined than ever to take the Night King down now.

And that may be especially hard if she comes face to face with her reanimated dragon-son in the final battle against the dead.

To add insult to injury, Viserion wasn't just killed when Dany arrived to save everyone from certain doom. The battle played out on a frozen lake, and Viserion was submerged in its icy waters after his death, but he wasn't left floating there for long. Soon enough the Night King was having the wights fish Viserion out again so that he could infect the dragon with that old zombie magic. When Dany sees Viserion again, he'll be greatly changed.

That means more painful moments are still to come, but fans are feeling plenty of pain right now. Viewers watched right along with Dany as those little CGI hatchlings became CGI monstrosities, so everyone was understandably attached; it wasn't easy to watch one of the dragons bite the dust (...ice?) in such a brutal way. Out of the many, many deaths that have occurred on Game of Thrones, this might be one of the toughest.

It's a good thing that fans have the Twitter and Tumblr and all sorts of internet spaces to vent on, because they're going to need to somewhere to share all that sadness. R.IP., Viserion. You'll be missed.