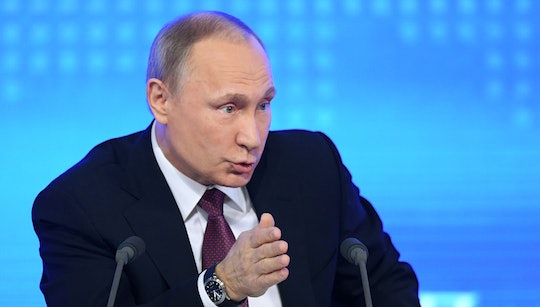 On Friday, President-elect Donald Trump's transition team released a letter sent to him by none other than Russian President Vladimir Putin. In a statement released alongside the letter, Trump said Putin's sentiments were "so correct" and called the missive "a very nice letter." The letter's release came soon after both leaders called for each of their countries to increase their supplies of nuclear arms, and brought forth further criticism of the president-elect's relationship with Russia. Read Putin's letter to Trump below.

The unofficial translation of the letter, provided by Trump's transition team to CNN and reportedly confirmed by Moscow, was written on Dec. 15 and read:

Serious global and regional challenges, which our countries have to face in recent years, show that the relations between Russia and the U.S. remain an important factor in ensuring stability and security of the modern world.

I hope that after you assume the position of the President of the United States of America we will be able — by acting in a constructive and pragmatic manner — to take real steps to restore the framework of bilateral cooperation in different areas as well as bring our level of collaboration on the international scene to a qualitatively new level.

Please accept my sincere wishes to you and your family of sound health, happiness, wellbeing, success and all the best.

Earlier this week, Trump and Putin's relationship seemed to be in for a bit of a speed bump after Putin called for Russia to increase its nuclear weapons during a defense speech on Thursday. Soon after, Trump tweeted, "The United States must greatly strengthen and expand its nuclear capability until such time as the world comes to its senses regarding nukes."

For a moment, the leaders' comments stoked fears of a new arms race — but during his end-of-year press conference that same day, Putin seemed to normalize Trump's tweet, saying:

In the course of his election campaign he (Trump) spoke about the necessity of strengthening the U.S. nuclear arsenal, and strengthening the armed forces. There's nothing unusual here. ... If anyone is unleashing an arms race it's not us ... We will never spend resources on an arms race that we can't afford.

Trump's transition team released Putin's letter the day after Putin said he wouldn't unleash an arms race. During that same press conference, Putin also praised Trump, saying, "Mr Trump did ... say during the election campaign that he thought it right to normalize U.S.-Russia links and said it would not get worse. Because they cannot get any worse, I agree with him on that. We’ll think together about how to make the situation better."

The release of Putin's letter on Friday seemed to be a reassurance on Trump's side that his relationship with Russia had not, in fact, soured. In his statement accompanying the letter, however, Trump did mention, "I hope both sides are able to live up to these thoughts, and we do not have to travel an alternate path."

Regardless of which path Putin and Trump ultimately choose, it's safe to say that the world will be paying careful attention to the two leaders' burgeoning relationship, especially after Trump takes office in January.