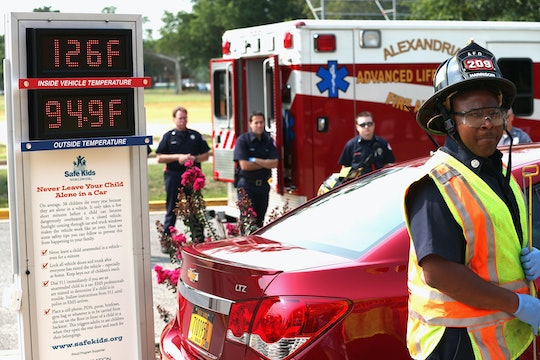 Mom Gets Honest About Forgetting Her Baby In The Car

According to the organization Kids and Cars, about 37 children in the United States die each year in hot-car related deaths. Unfortunately, statistics prove hot car deaths continue to be a problem despite ongoing awareness campaigns and prevention tactics to combat the issue. One of the reasons hot car deaths may still be a big problem is that many parents think this type of tragedy could never happen to their family. The reality is, leaving a child in a hot car is a devastating mistake any parent could easily make. Now that summer is officially here, all parents need to hear this mom's story about how she accidentally left her baby in the car.

Hot car deaths are as tragic as they are common. According to NoHeatStroke.org, 18 American children have already died this year as a result of being left in a hot car. Despite the fact that hot car deaths are unfortunately a widespread issue, there's still a lot of judgement and intense bias against parents who’ve unknowingly left their kids in a hot vehicle. The problem with this is that judgement and hate do not stop children from dying in hot cars. What can save a child’s life, however, is a little bit of honesty and understanding.

Britta Eberle, mom to a 2-year-old girl named Ava, is just one parent whose goal is to raise awareness about how easy it can be to leave a child behind in the car. In a post on the Facebook page “This Is Motherhood,” Eberle wrote an honest and brave message about a scary incident she had with Ava. According to Eberle’s post, she “forgot” Ava in the car while visiting friends with her other kids in tow. Eberle wrote that she and her kids were distracted as they exited the car to visit their friends — something many parents can probably relate to. Per Eberle’s account, she and her other kids had mistakenly assumed one of them had grabbed Ava and brought her inside.

Today I did the unthinkable and forgot about her in the car. Here's how it happened: our family arrived at a friend's house and in our excitement we all darted out, assuming that someone else had remembered to grab the youngest member of our clan. But no one remembered her. And she sat for about twenty minutes crying alone before one of us grabbed her. It was such a small mistake but it could have had devastating consequences.

Luckily for Eberle, she realized her mistake 20 minutes into the playdate. Although Ava ended up OK, Eberle ultimately decided it was important to share her story to help other moms who could also end up in this terrifying situation. Even though some parents might still attack Eberle for her actions, her ultimate point is that parents should "judge a little less" and instead pay closer attention to their surroundings.

Thank god we were parked in a safe place. Thank god it wasn't hot outside. Thank god she wasn't alone for long. Thank god she has already forgotten about it and forgiven us. But it will be a long time before I forgive myself. I usually think I'm a good mom. But I made a huge mistake today and I feel terrible. There are no excuses for what I did. And part of me doesn't want to share this. I don't want the world to know how badly I've failed. But then I think that I have to share this. I have to own up to my mistakes. I have to tell the world how far I am from perfect. And how if I did this, anyone could do this. And that scares me but also makes me judge a little less and makes me pay attention whole lot more. Tonight I snuggled my baby girl to bed. I read her a story, turned out the light, and stayed beside her listening to her breath got deeper and slower as she fell asleep. And felt so incredibly lucky. We are always so much closer to the edge than any of us realize. Hug your babies tight and practice forgiveness. Forgive those that make mistakes, even if the person who you need to forgive is yourself.

I was hesitant to share my story because I was worried that it made me look like a bad mom. But then I realized that many parents have probably had this exact same feeling and kept it bottled inside because it is so hard to talk about it. I wanted to share my experience to raise awareness because if I could do this then anyone could do it. I never thought I was capable of making a mistake like this until I did.

The good news is, it looks like Eberle's candid post is receiving positive feedback. A lot of readers have praised Eberle for her bravery and desire to help others by putting her own name and face out in the open, where people could attack her relentlessly.

Eberle's post aside, there is an actual scientific reason to explain why parents accidentally leave their children in cars. Dr. David Diamond, a professor of psychology at the University of South Florida, argues that "any person is capable of forgetting a child in a car," according to Hot Cars and Kids. Per Diamond's scientific findings, the "basal ganglia" part of the brain is what allows people to operate on auto-pilot, as opposed to the brain's "hippocampus," aka the conscious part of the brain. Considering these two parts of the brain are always competing with one another, it's easy for information to get lost in the fray. Diamond told Hot Kids and Cars:

This is where the systems compete against each other. In the case of you driving home, your basal ganglia wants to get you from Point A to Point B to the point it can suppress your hippocampus. [People] say you can forget to stop at the store, but you don’t forget your child is in the car. I get that feeling completely. I get that argument, but you can’t argue with brain function.

Obviously, Eberle's courageous post and Diamond's research aren't going to stop parents from judging one another. All one can hope is that more parents like Eberle continue to come forward to combat bias and judgment concerning hot car deaths. If more parents were honest and understanding about how easy it can be to forget children in the car, it's likely less children would die each year.