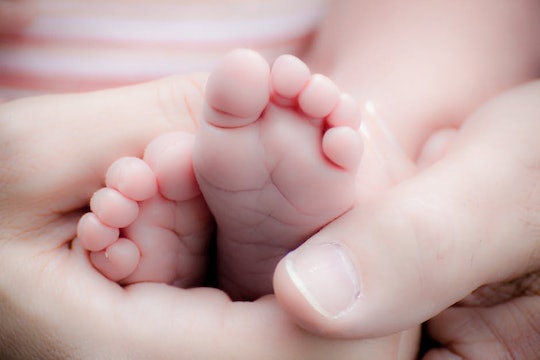 While vaccines are widely considered one of the greatest and most important medical advancements in modern history — and have saved millions of lives — there are a lot of people who still think vaccines are harmful and choose not to vaccinate their kids. And it doesn’t stop there: Following the sudden death of one family’s 7-month-old son, “anti-vaxxers” on social media were quick to place blame on the lifesaving medication without knowing an ounce of information. And that’s why everyone should read this mom’s heartbreaking response to anti-vaxxers who blamed her son’s death on vaccines.

On the morning of July 3, Jordan DeRosier posted on Facebook that her infant son, Sloan Valor DeRosier, had unexpectedly died. She wrote a touching message:

Our sweet rainbow warrior, your short time on this earth blessed so many. You were a gift to all who knew you, and an inspiration to all who didn't. Your death has impacted this world, it has left an emptiness felt by so many. Proof that you held with you so much light and grace. You were not able to live out our dreams for you, yet our dreams are where we will find you forever.

One day later, DeRosier shared her son's cause of death on Facebook. Not because she wanted to, but because she wanted her followers and those who commented on her post to know the correct circumstances that led to Sloan's death. And vaccines were not to blame.

"To those who keep commenting and messaging trying to blame vaccines for our sons [sic] death- stop," DeRosier wrote in the heart-wrenching Facebook post. "Initially I had not wanted to explain the detailed circumstances of his death because of my guilt and the fear of condemnation from others. But I will not allow anyone to try and place blame where it does not belong."

He was last laid down to bed with this blanket made by his great-great grandmother, and one other blanket, a grey one he had been attached to since birth. They took the grey one he had been found with his head in. He had pulled it through the crib rails somehow and gotten himself stuck in it. You never think it will happen to you. You never think it will be your baby. Please do not put your babies to bed with a blanket. Please. He was 7 months old, I thought because he was crawling, standing on his own, and climbing, that he would be fine with a blanket. This is the face of immense, unfathomable grief, the face of longing, of heartbreak, of self inflicted GUILT. I will NEVER stop feeling responsible. I will relive this for the rest of my life knowing EXACTLY what I could have done differently. Please learn from my world shattering mistake.

According to the Centers for Disease Control and Prevention, vaccines are very safe and the main risks associated with getting them are temporary side effects, such mild redness and swelling at the injection site. And while rare, severe allergic reactions can happen. But they do not cause autism and public health official say the "benefits of getting vaccines are much greater than the possible side effects for almost all children," according to the CDC.

What's more, the CDC estimates that because of the vaccines that were given to babies and children over the past two decades, more than "21 million hospitalizations and 732,000 deaths" will be prevented in the coming years.

Aside from placing uninformed and ill-advised blame on this family's tragic loss, this type of rhetoric about vaccines is dangerous. The grief they must be feeling can only be described as insurmountable, and this mom's brave message to other parents about what actually led to her son's death will hopefully save lives, even if it will open her up to even more attacks.

More Like This
Pinterest Predicts Their Top 2023 Trends In Parenting, Beauty, Fashion, Home, & More
Meghan Markle Recreated One Of Her Wedding Looks In NYC With Princess Diana’s Ring
Lizzo's Mom Gushes About Her Daughter As A “Champion Of Others” Who “Builds You Up”
Here Are Parents' Top Trending Searches In 2022, Because Google Really Is Our BFF