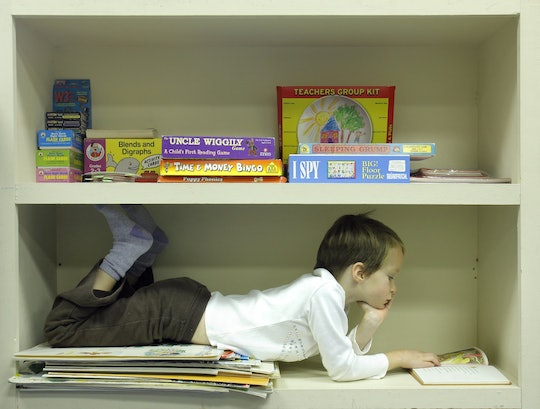 The latest Nation's Report Card is in and the results aren't looking too promising. In fact, the latest nationwide student achievement test shows that reading scores have declined among fourth and eighth graders in more than half the country. But reading wasn't the only area where students appeared to struggle. Although not as dramatic as the decline in reading scores, fourth and eighth graders in a number of states were also shown to have had declining mathematics scores, according to the the National Center for Education Statistics (NCES).

In an effort to gauge students' progress, the NCES assessed nearly 300,000 students across the United States in both reading and mathematics as part of its National Assessment of Educational Progress (NAEP), known more commonly as the Nation's Report Card. Researchers found that in the two years that have passed since 2017 (the last time the assessment had been carried out), the average reading score for fourth graders decreased by one point, hitting 220 out of a 500-point scale, according to NCES. In fact, only 35% of the assessed fourth grade student were reported to perform at or above the NAEP's proficient level and only one state — Mississippi — was shown to have an increase in fourth graders' average reading score.

Similarly, the average reading score for eighth graders was reported to have decreased by three points to reach 263 out of 500. According to a press release put out by NCES, eighth graders in 31 states showed a decrease in reading scores, while just one place — Washington, D.C. — showed improvement. Overall, just 34% of eighth graders scored at or above the NAEP's proficient level in their reading assessment.

"Over the past decade, there has been no progress in either mathematics or reading performance, and the lowest performing students are doing worse," NCES associate commissioner Peggy G. Carr said in a statement released Wednesday. "In fact, over the long term in reading, the lowest performing students — those readers who struggle the most—have made no progress from the first NAEP administration almost 30 years ago."

The lack of student progress in the latest Nation's Report Card has raised some concern among top education officials. While discussing the report at the National Press Club in Washington on Wednesday, U.S. News & World Report reported Secretary of Education Betsy DeVos claimed the country "has a student achievement crisis" that wouldn't be solved by increased funding for traditional public schools.

"It's way past time we dispense with the idea that more money for school buildings buys better achievement for school students," the news outlet reported DeVos said. "No amount of spending can bring about good results from bad policy." Instead, the Associated Press reported that she emphasized her support for expanded school choice, saying: "If we embrace education freedom, American students can achieve. American students can compete."

The National Assessment Governing Board, which is tasked with overseeing NAEP, was quick to refute DeVos' line of criticism, arguing that scores needed to be analyzed with context. "There is something to be said about believing in children and taking results like these in their full context," Tonya Matthews, the board's vice chairwoman, said, according to U.S. News & World Report. "Context matters."

While reading and math scores declined this year, past report cards from NCES show that fourth and eighth grade students have largely made noticeable progress since the assessment first began in 1990, with the first dip in scores not occurring until 2015.

"Our nation’s public schools are in dire need of robust investments — not Secretary DeVos' cuts and privatization plans," De Lauro said in a statement released by her office Wednesday. "Instead of exploiting these disappointing 2019 NAEP results to spread lies and promote her privatization agenda, Secretary DeVos should join House Democrats and families across our nation by supporting increased investments in our public education system."