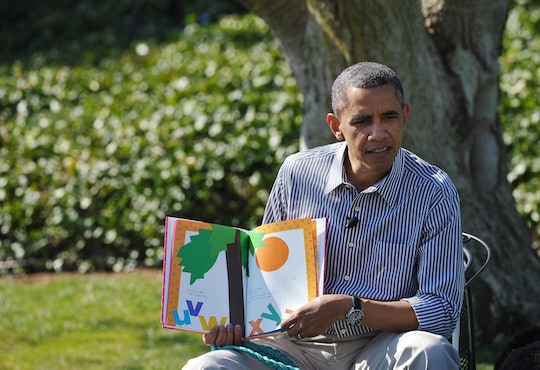 Reading to children has always been a good idea (and also really fun or really time consuming, depending on their favorite books), but now a new study suggests that reading to kids makes men better dads. Researchers from New York University who published their peer reviewed study in the Journal of Clinical Child & Adolescent Psychology decided to forego the long tradition of examining how reading kids helps mothers, and instead look at fathers to see if the results change according to gender. Apparently, it doesn't — and that's a good thing.

The scientists recruited 126 dads from New York City to join a "school readiness program" instead of a "parenting course" to lure participants, according to NPR. No one wants to think of themselves as needing a course to help them parent, but when you play with semantics, people show up.

The study had a 79 percent attendance rate, which is pretty good according to study author Anil Chacko. The participants were largely lower income, Spanish-speaking fathers who learned about the effects of reading at home to children along with some best practices during the lessons and then tried it out at home. The results were all around great.

Compared to students on the waitlists in such programs, the participants kids scored 30 percent higher on language development and readiness tests for preschoolers. The dads also improved by 30 percent when it came to "parenting skills" such as creating routines and discipline practices like rewarding good behavior and not relying on timeouts.

There have always been studies saying that reading to kids — whether it's by a dad or mom or anyone else in the family — helps children develop skills that will be useful in school later on. But the real story behind this study is how the researchers approached getting dads to show up for the parenting classes. Sure, it's a little sneaky to rename a program to make it more interesting to prospective attendants, but remember when you signed up for college courses called "Fundamentals Of Math" instead of "Complex Number Systems That Will Make Your Head Explode?" Same idea.

Parenting is hard and it isn't some skill set you magically gain just because there's now an infant keeping you up at night down the hall or a kid jumping on your bed. But the whole idea of naming the program "School Readiness" — which implies learning about how to help your child improve their chances in the school system — rather than "Parenting Lessons (Even Though You Have No Time To Even Take A Shower Or Money To Afford Them)" was essential to this study's success. And also getting men in the room.

Michael Addis, a professor of psychology at Clark University in Massachusetts who wasn't involved in this study told NPR, "I'm very glad to see research on fathering and the engagement in men of child care and child development. It is understudied; historically as a culture we have associated parenting with femininity."

So it's not that dads reading to their kids simply makes them better parents. It's about getting moms and dads into parenting classes to give them an outlet to express their frustrations, experiences, and giving them a constructive place to learn new, practical techniques that can help the entire family.

This new study simply shows that programs for parents work. Making those programs attractive, accessible, and affordable for all kinds of families is the next hurdle.