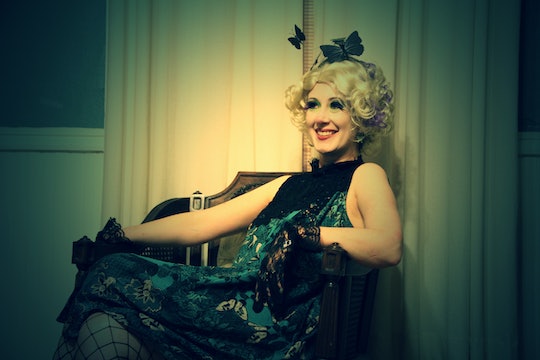 This Year, This Mom Wants Her Kids To Speak Up

What resolution do you think you're supposed to make? Why do you feel this way?: Most people my age seem to be running marathons (my husband says it's the new midlife crisis). So, I kind of feel like I should resolve to exercise more. That's always a worthy goal... though maybe I'll save it for 2018.

I want my kids to have joy in their fandoms, bravery in their activism, and the wisdom to ask "real or not real?" in a post-truth era.

What's your actual resolution this year, and why?: My real resolution is to have as awesome a family-themed Halloween costume in 2017 as we did in 2016. The kids and I were characters from Suzanne Collins's The Hunger Games series. I was Effie (pictured), Arina was Katniss, and Jack was Haymitch. We take costuming very seriously. 2017: best costumes ever? Challenge accepted.

What's the one resolution you won't make again?: In the past, I've resolved to stay on top of answering each and every email in a timely fashion, but now I realize that emails are like chocolate on a Candy Crush level. In other words, it's not possible. Especially when you have four inboxes to check. Hmm... maybe my resolution should be to delete some email accounts.

What's the one thing in your life you want to change but don't feel like you can?: Having to live under a Donald Trump presidency — though living is better than the alternative (obviously), and it's hardly practical to pack up and move to another country.

What's one thing you did or didn't do last year that you forgive yourself for?: My kids are homeschooled, and we never accomplish as much as I'd planned. I'm not sure if that's because I make unrealistic plans or execute them poorly. Probably both. That said, my kids know what Aleppo is, which means they're on par with some of 2016's presidential candidates.

Do you tell your kids your resolution? Why or why not?: Of course! We share both Halloween costume themes and resolutions. Honesty and transparency are admirable things, and I try to practice both as often as I can.

What specifically do you want for your kids this year?: I want my kids to have joy in their fandoms (whether The Hunger Games or Harry Potter, Star Wars or Oscar's Oasis); bravery in their activism (we rallied to "take down the flag" in 2015; advocated for Syrian refugees in 2016; and I have a sneaking suspicion that we'll need to do all of that times 10 in 2017); and the wisdom to ask "real or not real?" in a post-truth era.