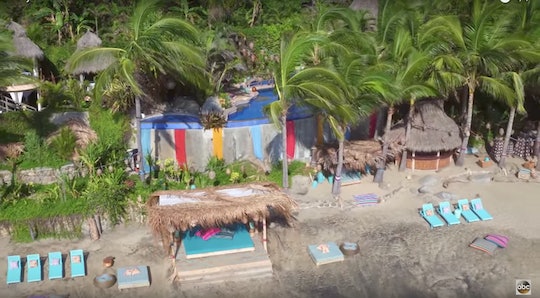 Though it hasn't yet aired, the most current Bachelor in Paradise season has stirred up more controversy than most, with conflicting stories abounding. In the wake of rumors that the show had been halted over an alleged incident involving two cast members, gossip outlets, entertainment sites, and more have done their best to keep fans up to date with the latest information. Recent updates from TV blogger Reality Steve on the unfolding Bachelor in Paradise controversy aimed to reveal the truth as well, but in doing so managed to reveal some very personal (and contested) information, some of which he's taken back.

Season 4 of Bachelor in Paradise was shut down, ABC said on Sunday, due to "allegations of misconduct on the set," the network shared. "We have suspended production and we are conducting a thorough investigation of these allegations. Once the investigation is complete, we will take appropriate responsive action," read a Warner Bros. statement.

These "allegations," as reported by multiple media outlets, involved two contestants who, under the influence of alcohol, allegedly engaged in sexual activity in a pool. One producer allegedly reported feeling uncomfortable having witnessed the intimate interaction. Later, though, it was said that the producer expressed discomfort because they felt that one of the parties involved was allegedly too drunk to consent.

Reality Steve broke the news that the season had been cancelled in a series of shocking tweets. He also tweeted out the names of the two contestants who were allegedly involved in the aforementioned incident — tweets that have since been deleted, because "a crime may have been committed," he wrote.

Steve offered his followers this explanation in a string of tweets below:

After an hour had passed, he addressed more concerns with the following:

He summed things up with another scoop, insisting that the production wasn't just halted for the time being, but that it would be cancelled altogether:

Like plenty of other Bachelor in Paradise-obsessed viewers, Steve wonders what will happen after the allegations are sorted. How much longer will fans have to wait for another season?

This is certainly not the first time that Reality Steve has gotten involved in Bachelor drama; He's a known spoiler with a keen eye for predicting and revealing each season's winner.

One of the people involved, past Bachelor contestant Corrine Olympios, reportedly "claims she was in a blackout state," TMZ wrote, when the incident in question went down. The other party, DeMario Jackson, claimed to recall the event in full. Olympios reportedly did not blame Jackson for what happened, but instead blamed the show's producers for failing to protect her.

Of course, Reality Steve had some thoughts on the matter:

The other Bachelor in Paradise cast members have since jetted to Houston, far away from "paradise" itself, and sans Olympios and Jackson, a fan's Instagram post revealed.

Given all the upset, a revival of this cast seems unlikely. If anything new happens, though, you can surely count on Reality Steve to tweet the scoop before anyone else.