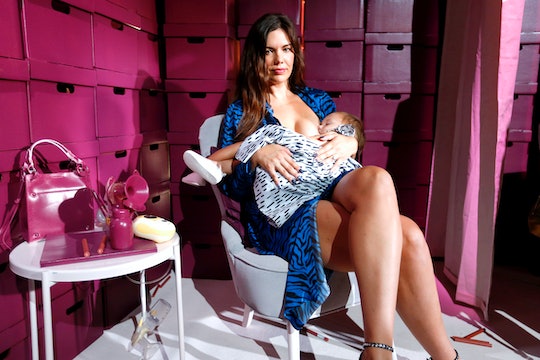 Breastfeeding and pumping moms are rarely represented in the fashion world, which is one reason why Rebecca Minkoff's New York Fashion Week show is receiving a ton of praise from parents everywhere. Not only does this inspiring show normalize breastfeeding, but it highlights the many layers of motherhood.

Minkoff, a famed designer, went where few fashion CEOs have gone before when she decided to include a breastfeeding model in her 2019 NYFW show on Saturday. In shots from the show, the gorgeous Mara Martin is seen breastfeeding her daughter against a backdrop of magenta shoeboxes. Martin gazes directly into the camera, sitting beside a table topped with a Medela Freestyle pump and a purse. It's a powerful image, to say the least, but what stands out in particular is its nod to working moms. That's because moms rarely receive the recognition they deserve for wearing many different hats, a sentiment Martin touched on in her Instagram about the show.

"Such an incredible experience. To be apart of a show that represented women of different sizes and ethnicities, while celebrating the working woman was such an honor," she penned.

‌Minkoff, who partnered with Medela for the fashion show, paid tribute to working moms in a caption of Martin's photo, writing, "Shoutout to all the working moms."

As one might expect, Minkoff's tribute to pumping and breastfeeding mamas is a hit with many. Model Tess Holliday, for instance, took to Instagram to praise the designer's efforts and give kudos for the launch of her first size-inclusive pieces in a partnership with Stitch Fix, which debuted at her presentation.

"This is everything," she captioned a behind-the-scenes shot of Martin and her baby. "Literally want to cry at this."Other parents chimed in too, with one commenter writing on Instagram: "As an #MotherOf3 breastfed babies, this brings me so much joy!"

Someone else added: "Real life is beautiful."

For longtime fans of Minkoff, this campaign shouldn't come as big surprise. The mother of three is all about empowering women and parents, as she draws support from her team daily to make this whole parenting thing work. "I definitely say it all the time, but it it takes a village!" she told The Bump regarding how she manages to do it all. "I have a team of 80-plus mostly women with great leadership and support, so, first and foremost, it’s my team. I try to empower them to run with the areas they own and foster collaboration."

Minkoff is also an advocate for breastfeeding moms getting the support they need in the workplace, a topic she spoke on in a January interview with Romper.

"No fairy pumper CEO is coming to change the system and make it OK, so demand that important meeting, get out around your schedule, and plan this in advance of your return to work, or take the hands-free pump and cover and pump like a boss in all your meetings," she said. "I do, and have done it in rooms of men and board meetings. Mostly because I had to, but also to set an example for how we work and get our milk, too."

Minkoff's work highlighting breastfeeding and pumping moms in the fashion world and beyond deserves a round of applause. Hopefully, her advocacy will inspire other designers to represent these all too overlooked groups in their own fashion shows.

More Like This
Is It Safe to Take Ibuprofen While Breastfeeding?
How To Breastfeed A Baby With A Cleft Lip Or Cleft Palate
6 Ways To Fix A Shallow Latch So Your Baby Can Nurse Properly
Breastfeeding Twins: Everything You Need To Know