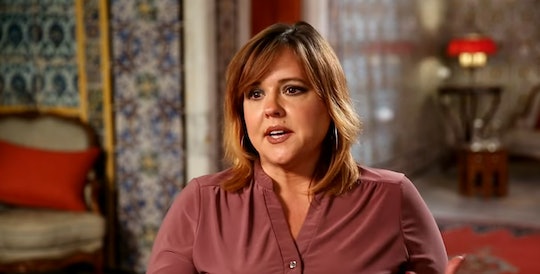 Rebecca Needs To Tell Zied Everything ASAP On '90 Day Fiance'

Things didn’t go as smoothly as Rebecca thought they would when she went to visit her boyfriend Zied in Tunisia on 90 Day Fiancé: Before the 90 Days. Her heavily tattooed arms didn’t sit well with Zied’s parents, and they caused quite a tor when she went out with him to a club. She still hasn’t come clean about her past relationships, but Rebeca’s Instagram from 90 Day Fiancé does show that she still has feelings for Zied.

For starters, her Instagram profile picture is a shot of her and Zied together, so right off the bat, you can assume the two are still together. Throughout her page, you’ll find plenty of photos of her and Zied in Tunisia, including one of him kissing her on the cheek. “If you aren’t willing to risk everything for love, what else is there,” she captioned the post. “If finding love is at the end... I’ll fight till the end. And regret nothing.”

On the show, Rebecca has said that she wants to eventually marry Zied and bring him stateside, but after seeing how his family and friends reacted to her, she began having some doubts. "My goal is to get engaged and bring Zied back to America," she says on the show. "But I've got so many worries about how his sister feels and his parents' doubts about me. So, I'm having doubts about the strength of our relationship right now."

While Zied’s parents may not approve of Rebecca’s tattoos, in an IG post showing off her ink, the reality star admitted she has no plans on getting them removed. “I’ve been asked about my tattoos a lot lately, so I thought I’d post these,” she captioned the photo. “These are about a year old. Most of them have a meaning, but some I got just because I loved them. I have no plans to get more, and I have no plans to remove any.”

On the last episode of 90 Day Fiancé, Rebecca told Zied she was once in a relationship with a woman, and while she hasn’t posted any pictures of that person, or any other exes on her IG page, she did share her sentiments about the issue in a recent post.

“I’m getting a lot of questions about what I told Zied on tonight’s show, about my being in a relationship with a woman previously,” she wrote. “I did this because it was important to me that Zied accept me for me, and I wanted to know what it felt like to lay everything on the table and still be loved. Also, my ex was VERY homophobic and I am simply not going to allow that in my life. I have no room in my life for people who judge others for who they choose to love.”

Rebecca still hasn’t told Zied that she’s still married to her ex, and I’m sure she’ll take to Instagram to explain herself once the shocker is revealed on the show.