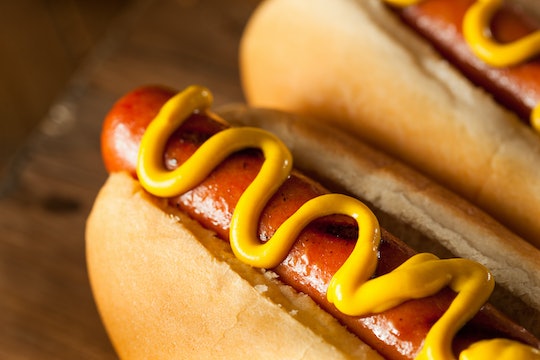 You might want to check your pantry before firing up the grill and inviting company over for a cook-out this weekend. This week, the U.S. Food and Drug Administration (FDA) announced a voluntary recall on hamburger and hot dog buns sold nationwide and here's how to know if your buns could be affected.

On Wednesday, July 10, Flowers Foods issued a voluntary recall of both hamburger and hot dog buns sold in 18 different states across the nation under different name brands at several different grocery stores and convenience stores, according to the FDA. Flowers Foods, based in Thomasville, Georgia, issued the voluntary recall after discovering small pieces of hard plastic could be in the production equipment, according to the FDA.

Fortunately, no injuries or cases of illnesses have been reported thus far, according to CBS News, but the recall was issued as a cautionary measure as these pieces of plastic could pose a choking hazard, according to FDA's recall notice.

Romper's request for further comment from Flowers Foods regarding the recall was not immediately returned.

If you're worried you may have any of the recalled items, it's easy to determine if your hamburger or hot dog buns are included this recall. You'll need to look at the UPC code, the state they were sold in, and the brand of the product. Additionally, the recalled products have a sell-by date of July 18, 2019 or July 19, 2019. You can view a full list of these products and their UPC codes online. According to CBS News, the recalled products were sold and distributed in several states, including:

Additionally, according to the FDA, the hamburger and hot dog buns were also sold under the following brands:

And if you do have any of these recalled products, you should not consume them, according to the FDA. Instead, you should throw them away or return it to the place they purchased them from for a full refund, according to a press release from Flowers Foods. Consumers with any further questions about this recall are advised to call Flowers Foods' Consumer Relations Center at 1-866-245-8921, Monday through Friday from 8 a.m. to 5 p.m. EST.

Food recalls are always concerning to hear about, especially when they involve a summertime staple, like hotdog and hamburger buns. Fortunately, the company has identified a possible hazard and has taken action to inform its customers of the potential risks. Don't hesitate to reach out to Flowers Foods if you have any further concerns or questions about this recall. And, as always, if you're worried you or your child has consumed a recalled item, be sure to see a trusted medical professional.