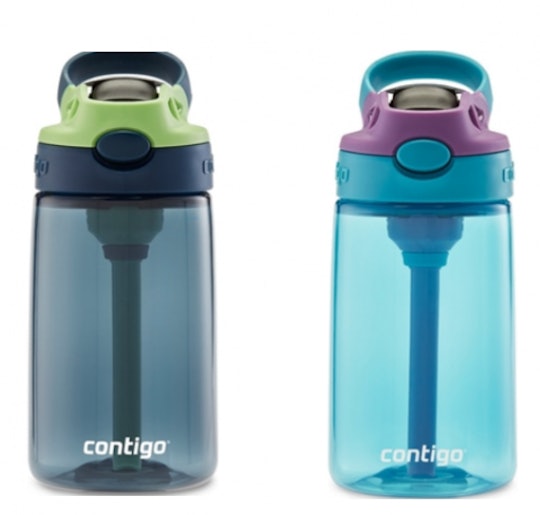 Contigo Expands Recall On 5.7 Million Kids Water Bottles Due To A Choking Hazard

You might want to have a close look at the water bottle in your child's lunchbox as it may have been recalled due to a safety concern. On Feb. 19, the U.S. Consumer Product Safety Commission (CPSC) expanded a recall on millions of Contigo kids water bottles — sold at multiple popular stores including Target, Walmart, and Costco — after receiving reports that the water bottle's spout can detach and pose a choking hazard to children

Back in August, Contigo and the CPSC initially announced a recall on about 5.7 million Contigo Kids Cleanable Water Bottles, including 157,000 that were sold in Canada. After receiving additional reports of the spout detaching, the company and the CPSC re-announced the recall to make sure parents are aware. To date, according to the CPSC recall notice, Contigo has received 427 reports of the spout detaching, including "27 spouts found in children’s mouths."

"Consumers should immediately stop using the recalled water bottles, take them away from children and contact Contigo for inspection instructions and a free replacement lid," the CPSC said in a recall notice.

The recalled water bottles were sold between April 2018 through February 2020. They come in three sizes (13 oz., 14 oz. and 20 oz.) and included a variety of colors, materials and graphics. The recalled items were sold individually as well as in packs of two and three, according to Contigo. Additionally, the recalled products have a black spout base and a black spout cover.

"The base and cover of the clear silicon spout will always be BLACK," the CPSC said. "Only black color spout base and spout cover models are included in this recall. Contigo is printed on the rim and along the front near the bottom of the bottle."

In a statement on the company's website, Contigo said, "As a leading innovator of water bottles, travel mugs and kids bottles, Contigo puts safety and quality first. As part of our commitment to consumer safety, Contigo, in partnership with the U.S. Consumer Product Safety Commission (CPSC), is voluntarily recalling the lids of the Contigo Kids Cleanable Water Bottle.

In August, Target told Romper via email that it was aware of the recall and had "removed affected products from our stores and from Target.com."

If you're concerned that you may have a recalled water bottle, Contigo has directed consumers to visit the company's website for more detailed information about the recall as well as a step-by-step guide on how to tell if your water bottle. For further assistance, you can also call the Contigo customer service hotline at (888) 262-0622 Monday through Friday, 9 a.m. to 5 p.m. EST. According to the Contigo, refunds are available at point of purchase or you can order replacement parts by filling out their online form.

This article was originally published on Aug. 27, 2019