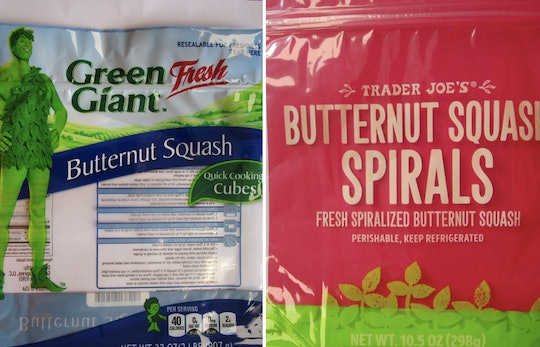 Some Packaged Veggies Sold Under These Popular Brands Have Been Recalled

Adding to what seems like an unprecedented amount of food recalls lately, the U.S. Food and Drug Administration (FDA) has announced a voluntary recall on packaged veggies sold under several popular brands due to concerns that the produce may be contaminated with listeria. But before you toss everything in your kitchen, here's what you need to know about this latest recall.

The manufacturer of the packaged veggies, Growers Express, initiated the voluntary recall, which includes butternut squash, cauliflower, zucchini and, a butternut squashed based veggie bowls, according to the FDA. "The voluntary recall was issued due to the potential for contamination with Listeria monocytogenes," Grower's Express said in a statement. According to the FDA, the recalled veggies are sold under three brands: Trader Joe's, Green Giant, and Signature Farms, so you'll want to look for those labels in your fridge or freezer.

The recalled product were distributed to states throughout the country, and most of the potentially affected products had a “Best If Used By” Date of June 26 to June 29, 2019, according to Growers Express. More specifically, according to the FDA, products that are part of this recall include:

To see if your veggies are included in the recall, you can reference the FDA's complete list of recalled products and their stores of origin.

The voluntary recall was issued after routine tests found traces of listeria in the company's Massachusetts factory, according to CBS News. And fortunately, according to the FDA, the manufacturer and the agency are not aware of any reports of illnesses.

Following the recall, Tom Byrne, President of Growers Express issued a statement to the FDA, stating: "The safety of our consumers is our first priority. We self-reported the need for this recall to the FDA and stopped production immediately after being notified of a single positive sample by the Massachusetts Department of Health."

Byrne also said new health precautions are already underway. "We are deep sanitizing the entire facility and our line equipment, as well as conducting continued testing on top of our usual battery of sanitation and quality and safety tests before resuming production," he said in the statement.

Romper has reached out to Trader Joe's, Green Giant, and Signature Farms for further comment on the recall, but did not receive an immediate response. Trader Joe's did write on their website that customers should discard the recalled products or return it to any Trader Joe’s store for a full refund.

Listeria is a harmful bacteria that can cause infections if people consume contaminated food. Symptoms can vary, some include diarrhea, fever, vomiting, and achy muscles, according to the New York State Department of Health. While most experience mild symptoms, Listeria infections can be especially severe for young children, frail or elderly people and those with weakened immune systems, according to WebMD.

Listeria infection is also especially dangerous for pregnant women; according to the FDA, such infections have been linked to stillborn deaths and miscarriages. Fear of listeria poisoning is one of the reasons doctors tell pregnant women to stay away from deli meats and soft cheeses, according to The American Pregnancy Association.

So before whipping up dinner, be sure to take a good look in your freezer to see if you might have any of the potentially affected products tucked away for future use. And when in doubt, just throw it out.