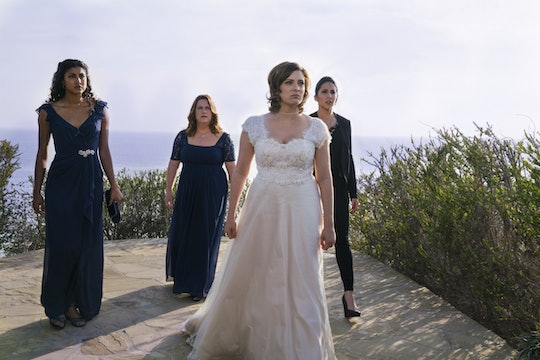 The finale of Crazy Ex-Girlfriend Season 2 changed the game by setting off a chain of events that will continue to reverberate long into the upcoming season. When the show started, Rebecca Bunch was a new arrival in West Covina looking to win the heart of her summer camp sweetheart Josh Chan. They got together but the results were explosive — and not in a good way. This recap of Crazy Ex-Girlfriend Season 2 dives deep into how and why everything went off the rails, just in time to see how Rebecca plans to pick up the pieces in Season 3.

Each season of Crazy Ex-Girlfriend peels back the stereotype of its title a little more, giving its protagonist depth and nuance that explains her behavior without excusing it when it gets out of hand. Rebecca had been fighting a losing battle against her unhealthy impulses for years as she tried to discover the secret to real happiness, which was no easy feat. She focused on Josh as the source of that happiness despite the fact that his life was just as uncertain as hers, and his betrayal at the end of the season cut her deeply on more than one level. It seems like Season 3 is where Rebecca will go full Gone Girl, taking vengeance on Josh and finally living up to the stereotype. But how did she get to that place? Here are some of the biggest storylines that took place last season...

In a surprising twist, Greg left West Covina to go back to Emory despite his feelings for Rebecca. After seeking help for his alcoholism, Greg started to figure out what he really wanted and what would be best for him, which included finally leaving town like he'd originally planned before his dad's illness.

Paula & Rebecca Have A Falling Out

Paula and Rebecca's friendship has been the backbone of the series, but in Season 2 they began to drift apart. It was heartbreaking to watch them become so distant, but thankfully they were able to get closer again.

Part of what kept Paula and Rebecca apart was normal life stuff, like starting new projects and losing track of old friends. Paula went back to school to become a lawyer, something that truly fulfilled her, and she made new friends there. She also dealt with marriage trouble after her husband cheated on her and she chose to forgive him.

But one of the most notable aspects of Paula's storyline in Season 2 was when she found herself unexpectedly pregnant. Getting married and having children had deferred her dreams years earlier, so Paula decided to have an abortion. The show handled it in a refreshingly casual way, offering Paula support without an ounce of judgment.

Paula made new friends in Season 2, but Rebecca deepened existing relationships in surprising ways. After both Rebecca and Valencia were dumped by Josh, they bonded unexpectedly thanks to the wonders of drug-induced dream ballets. Rebecca also grew closer to Heather after a house fire, leading them to decide to move in together. The new girl group also resulted in one of the best songs of the season, "Friendtopia."

There was a lot of back and forth with Josh and Rebecca's relationship in Season 2. They got together, broke up, and then suddenly got engaged. It was clear they were both just trying to ignore other issues in their lives by diving into a serious relationship, but that didn't stop them from going full speed ahead.

The Arrival Of Nathaniel

Darryl's decision to sell the law firm brought a new character onto the show: Nathaniel Plimpton, a tough boss with secret daddy issues and trouble relating to people on an interpersonal level. He developed feelings for Rebecca, who ultimately decided not to act on the mutual attraction because of her relationship with Josh. However, things are likely far from done between them.

Rebecca's Past Was Explored

Season 2 continued to explore Rebecca's past, revealing late in the season that her obsessive behavior with Josh was nothing new. It was a pattern she had fallen into before with her old professor Robert. After setting fire to his bed (just like she set fire to Josh and Greg's belongings early in the season), she spent some time in an institution. The return of her estranged father for the wedding didn't help things, either.

Rebecca and Josh's wedding was never a good idea, but it fell apart in a spectacularly bad way. Josh decided to book it without telling anyone where he was going, leaving Rebecca in the lurch mere minutes before the wedding was set to begin. That made her, along with Paula and Heather and Valencia, vow vengeance against him.

After running from the wedding, Josh chose to do something fairly sudden: he decided to become a priest. Removing himself from the dating playing field seemed like the best option to him after a series of romantic mishaps, but there's no way to tell how this will unfold until Season 3.

The second season of Crazy Ex-Girlfriend set a lot of major plot points in motion that will make the upcoming season an exciting one, no matter how it all turns out.