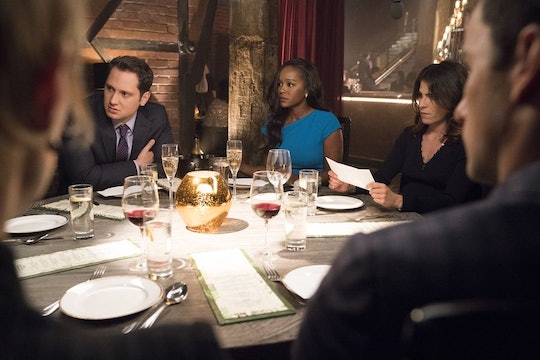 Unfortunately, How to Get Away With Murder seasons have never been more than 15 episodes long, so the last season came to an end back in late February, which now seems like ages ago. Therefore, before you dive right into Season 4, you'll probably want to freshen up on what went down in Season 3. But don't worry. I'm here to recap How to Get Away With Murder Season 3 for you, so you don't have to rewatch the entire third season. Unless you want to, of course. It was a pretty great season.

As always, the third season began with a big mystery, however unlike past seasons, fans (and the actors on the show) didn't know the answer to the question at the start of the story. Meaning, they were unsure who would end up dead by the mid-season finale and perhaps even more importantly, why. Thus, a new murder mystery began and the Keating Five, along with Annalise, Bonnie, and Frank, were one step away from going to jail. Thankfully, as always, the group was able to get away with murder once again, though not everyone made it out of the season alive. So before we find out what's next for this cold-blooded crew, let's first remember what they went through in order to get to where they are.

Who Was Under the Sheet?

The season began by asking, "Who's under the sheet?" The season premiere revealed Annalise's house was mysteriously blown up and someone died in the fire. By the mid-season finale, it was revealed that it was Wes who ended up losing his life.

The second half of the season focused primarily on figuring out why Wes was killed and who did it. In the season finale, it was revealed that Laurel's family friend, Dominic, killed Wes on orders from Laurel's father. Additionally, Dominic was also working with A.D.A. Denver, though it's unclear what his connection is to Laurel's father.

During the episode leading up to the #WhosUnderTheSheet reveal, it was discovered that Laurel is pregnant. Although there was speculation it could be Frank's baby, Laurel confirmed the child belongs to Wes. She hasn't decided yet what she'll do about her pregnancy.

After everything that went down with Annalise and the Keating Five, it wasn't shocking someone finally broke. Connor ended up flipping and revealed to Denver that Oliver had a copy of Annalise's phone, which Annalise then used to pin all the murders on Wes, who left a voicemail on her phone confessing to killing Sam. Thus, it worked out in Annalise's favor.

Towards the end of the finale, Oliver proposed to Connor and although there was no answer given, show creator Peter Norwalk said their relationship will "just get deeper" in Season 4. Could there be wedding bells this season?

By the end of the season, Wes' murder remained unsolved, so Laurel decided to take matters into her own hands. Believing Charles Mahoney was responsible for Wes' death, Laurel was willing to shoot him point blank out on the street. Thankfully, Dominic jumped in before Laurel could actually get herself sent to prison. Little did she know that Dominic himself was the one really responsible for the crime.

Michaela & Asher Are In Love

The couple that probably no one expected to go this far or last this long are in love. Although Michaela was shocked and almost scared off when Asher confessed his feelings, by the end of the season she realized she loved him too. In Season 4, these love birds will be shacked up.