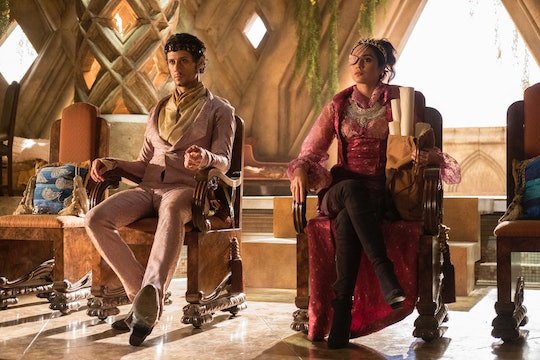 Everything You Need To Remember About 'The Magicians' Season 2

The Magicians returns to SyFy for a third season this week, but it's been awhile since we last left Fillory, so it might use useful to recap The Magicians Season 2, so you can refresh your memory about everything that's happened. An unbelievable amount of stuff went down in 13 episodes, from Eliot and Margo navigating the monarchy, to the reunion of not one, but two characters and their shades, to a giant musical number in the style of Les Misérables' "One Day More." Oh and also, Margo lost an eye to the fairies which led to some very impressive, jewel-encrusted eyepatches.

As we look forward to Season 3, the Brakebills gang (plus Julia) are left to figure out how to get magic turned back on again after the gods who spawned Ember and Umber turned it off. Why would they do such a thing? Because Quentin and his friends pitted the two brothers against each other, which resulted in Ember killing Umber and Quentin killing Ember. (So much for family happy reunions.) Season 2 ends with the cliffhanger revelation that Julia is able to make a few tiny sparks of magic zip out of her fingertips, but here's a quick rundown of everything else that happened in Season 2.

The Kings & Queens Of Fillory Were Crowned

In a coronation ceremony, Eliot and Margo became the High King and High Queen of Fillory. Quentin and Alice also became a lower king and queen. As High King, Eliot had to stay in Fillory forever and never return to earth. He also took a Fillorian wife — one who is not Margo — to seal his commitment.

One of the problems in Fillory is that the wellspring of all magic is running dry, and without magic, Fillorians can't grow their crops. (Yeah, their entire agricultural system runs on magic.) Eliot, who knows next to nothing about the magical parallel universe, did happen to grow up on a farm, so he actually was able to provide a little bit of leadership in this arena as king.

Later, the wellspring became compromised when, to prevent The Beast from drinking it, Ember, uh, used the wellspring to relieve himself. This made its magic go even more haywire.

Julia Teamed Up With The Beast

Julia betrayed her friends to team up with The Beast and embark upon her own hero's journey to defeat Reynard the Fox, a trickster god who raped her and killed her circle of Hedges.

Meanwhile, the gang discovered that The Beast had placed a curse on the throne room at Castle Whitespire, which is why all of Fillory's kings and queens keep winding up dead. With Penny's help, Eliot, Margo, Quentin, and Alice cleverly circumnavigated their overwhelming impulse to kill each other.

Alice Figured Out How To Kill The Beast

After drinking Ember's ~seed~ (ugh), Alice found herself with souped up magical powers. It was exactly the kind of boost she needed to be able to kill the beast, and with the help of Dean Fogg, the gang figured out a defensive magic spell to finish him off for good. The only catch was, Alice couldn't be in close range while completing the spell or she'd die herself. (Spoiler alert: she can only do the spell at close range.)

Alice ended up Niffining out, but her Niffin form returned to kill The Beast once and for all. Unfortunately, she then turned on her friends, so Quentin had to unleash his backup weapon, the Cacodemon tattooed onto his back, to finish her off for good and save his friends.

When Quentin discovered there was no way to bring Alice back, he asked the White Lady to send him back home to New York and be away from magic. He took a day job and grieved his dead ex-girlfriend.

After Alice's death, Quentin started seeing her ghost everywhere. It turned out she was still a Niffin trapped in Quentin's Cacodemon tattoo. She basically tormented him until he let her have scheduled takeovers of his body to do as she pleases — which turned out to be trying to figure out how to resurrect herself. Eventually, she was able to communicate to Quentin that he needed to go to the Underworld to find her shade and restore her.

After he secured it, he enlisted Mayakovsky to reunite Alice and her shade, and it worked! But she was depressed to be a lowly human again.

In an attempt to steal a book The Art of Killing Gods, which could help them to take Reynard down, Penny entered the library's Poison Room. He managed to find what he came for, but the visit came with severe ramifications. Turns out the Poison Room is called that for a very good reason. While there, Penny contracted a form of magical cancer, which is fast-acting and, unfortunately, terminal.

Julia became pregnant with Reynard's demi-god child. Trying to get an abortion resulted in Julia's doctor killing herself. Only witches can do this job, but they demanded a million dollars in gold from Julia to do it. She secured it by robbing a bank and they successfully exorcised the demon fetus, but there was a complication: Julia also lost her shade. Shade is sort of like The Magicians' version of a soul, and without it, Julia couldn't feel pain, but she also couldn't feel much of anything else. So she embarked on a journey to find the only woman to successfully banish Reynard from Earth. It turned out she had his baby, too. An unwitting demi-god, Reynard's son was a golden boy senator with no idea why he's had such good luck.

Reynard's son, upon learning who he was and seeing the evil of Reynard firsthand, convinced Kady to murder him and harness the magical energy that gets released when he dies. With this magic, they could finally kill Reynard.

Julia went to the underworld, found Persephone, who is actually both Our Lady Underground and Reynard's absent mom. In exchange for Julia sparing Reynard's life, Persephone agreed to reunite her with her shade.

Margo Married The Prince of Loria

A delegation from another magical kingdom called Loria arrived and Margo married its Prince, Ess, (yes, his full name is Prince Ess, which confuses all) to merge the kingdoms. Unfortunately, Margo wound up declaring war on them. Eliot decided to spare the kingdom by going into one-to-one combat with Prince Ess.

Magic was still on the fritz, so Margo made a deal with the fairies that they could have Eliot and Fen's baby-to-be. They also took her eye in exchange for passage between the fairy realm and Fillory.

In a last ditch effort to stabilize the magic of Fillory, the gang reunited Ember and Umber so they could destroy each other. Unfortunately, they didn't think through that gods have parents and those parents are pissed that humans schemed to kill their sons. They turned off magic for good and the students of Brakebills were left to study magic theoretically.

So does Julia hold the key to restoring magic? Will there be more musical numbers (fingers crossed for one in the style of Hamilton)? Will Penny's collection of scarves continue to impress? Stay tuned when The Magicians returns to find out.