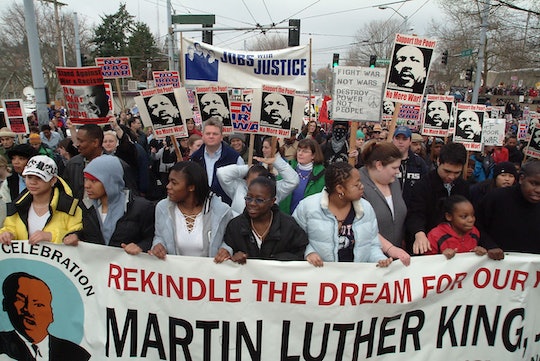 Monday, Martin Luther King Jr. Day, is meant to be a day to celebrate progress. It’s meant to be a day to think about the man who has become one of the most beloved figures of the Civil Rights Movement and to celebrate his bravery and vision. But 30 years after Martin Luther King Jr. Day became a recognized holiday in America, people are still conflicted. Because as much as King is admired — as much as he is hailed as a hero worthy of a day named in his honor — when it comes to the rampant racism that continues to occur right before our eyes, people seem to be forgetting his message. The hashtag, #ReclaimMLK, reminds people of King's message while pointing out the hypocrisy of not acting on or supporting Black Lives Matter and other current civil rights campaigns.

The Chicago-based Black Youth Project 100 launched a Twitter campaign Friday using the hashtag #ReclaimMLK, arguing that King's real legacy was not one of peace and restraint and pacifism, but of a fight for radical change and fearless protest. It should remind people that, as much as they love to hold King up as an icon, the reality is that many are still uncomfortable with his message. Do #blacklivesmatter? Or do #alllivesmatter? Should Jason Van Dyke be held responsible for shooting 16 bullets into unarmed 17-year-old Laquan McDonald?

What are the names Michael Brown or Tamir Rice or Walter Scott or Sandra Bland or Freddie Gray supposed to mean to the nation? When activists interrupt a political town hall meeting, or when they protest in ways that are disruptive and loud and inconvenient, do people applaud them, the way they do retrospectively when they think of King? Or does the nation (and politicians) tell them to be quiet, to be dignified, to stop overreacting? Do people still insinuate that activists are deserving of the backlash they receive? The answers to all of those questions make it clear that many of those who claim to support King — who posted his quotes as their Facebook statuses on Monday — would say that civil rights activists now are asking for too much by advocating for their rights.

It’s easy to see someone like King as a brave hero when people label what he stood for and fought against as just a part of history or as some bygone era whose discrimination and violence has been erased. Clayborne Carson, director of the Martin Luther King Jr., Research & Education Institute at Stanford University, told Mother Jones that King's fight isn't over. By holding King up as the man who achieved equal rights for black people, the nation is assuming that the fight for equal rights is over or is no longer necessary, according to Mother Jones:

One puts King back into the past and it is more of a comforting notion of King. One of the messages you get at a King holiday celebration is, 'We had this problem called racism once, and he helped us solve it.' There is this comforting notion that King was part of a past that America has moved beyond and we can all pat ourselves on the back.

But it is this sanitized idea of racism, the kind of in-the-past rhetoric we tend to associate with King, that #ReclaimMLK and many BLM activists were targeting on Monday. It’s about remembering that the Civil Rights Movement was not a historical one-off, but an ongoing, continuous fight. It’s about acknowledging that while King did advocate for peaceful protest, he also said, according to TIME, that “a riot is the language of the unheard,” standing up for the intense feelings of frustration and inequality that drives people into action. And it’s admitting that the same King that we herald is the King that would likely condemn the criticism lobbed at Black Lives Matter activists today whenever they attempt to disrupt the idea that institutionalized racism is somehow not a problem in the U.S.

Additionally, it’s easy to forget that King used to be criticized and feared, too. He used to be seen as a threat, labeled, according to The New York Times as “the most dangerous Negro of the future in this nation,” by the FBI. He fought the status quo and he was radical, and it worried white people. As easy as it is to place him on a pedestal today, according to Daily Kos, King was once hated by most of white America for his activism, earning the same type of criticism many white people still dole out to black activists (and, it seems, to black people in general).

It seems that honoring King’s legacy is not just about remembering what he did back in the day. Honoring his legacy is about remembering why his message is still relevant, why movements like Black Lives Matter are still necessary, and acknowledging and checking white privilege when wondering why black protestors can’t remain calm or when suggesting they are overreacting.

Celebration in King's name is about understanding why it’s important to #ReclaimMLK not only today, but every time people hear about racial injustice and allow themselves to be comforted by the idea that it probably isn’t that bad. King didn't demand change by being quiet and passive in the face of white supremacy — he did it by being loud, unappeased, and intimidating. If the nation really claimed to love King the way it says it does on MLK Day, then it might want to start supporting movements for racial equality that making it feel "uncomfortable" now.