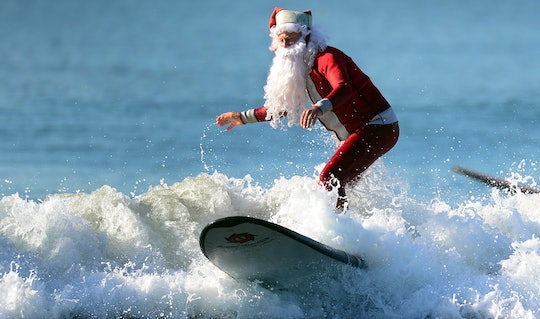 Turns out a lot of people will be dreaming — and only dreaming — of a white Christmas this year. Record-breaking warm Christmas temperatures across the U.S. have many of us turning on our air conditioners rather than curling up by the fire with a nice warm mug of hot chocolate. Thursday marked the warmest Christmas Eve on record for much of the northeast. Here in Boston, where we reached a record 66 degrees yesterday, I actually need my sunglasses today and could even throw on a pair of flip flops. Across the U.S., weather stations are reporting some pretty ridiculous temperatures this Christmas: 60 degrees in New York City, 67 degrees in Philadelphia, and a rather balmy 71 degrees in Atlanta.

What is this weather madness? Is it just a holiday fluke — or could it be the early signs of impending climate change? Meteorologist David Epstein nips that notion right in the bud, saying that climate change isn't responsible for the warmest December on record:

When the weather gets weird, we often have strong reactions to what’s happening out there. It may seem logical that if, somehow, humans hadn’t spewed trillions of metric tons of carbon dioxide into the atmosphere over the past century, we'd have a cold, snowy December as has often been the case in the past. Right? Wrong. This Isn't Climate Change.There have been many snowless Decembers before. Climate change isn’t responsible for this warm December.

So what exactly is causing all this weather wonkiness that has wiped out our white Christmas? Blame it on El Niño, my friends.

El Niño is a band of warm ocean currents that occur in the Pacific Ocean; the phenomenon is so-named "El Niño" — Spanish for "The Christ child" — as it typically reaches its warmest ocean temperatures during December. The warmed ocean currents feed weather systems that cross over it, causing more flooding and severe storms than usual. This year's El Niño is predicted to be one of the strongest of the phenomenon on record. It's this same wild weather that may have contributed to the severe weather earlier this week that spawned as many as 24 tornadoes that killed 10 people in seven states.

So put away those hats and mittens and grab your umbrellas: While still just six days out, forecasters are already calling for a rainy night in Times Square for New Year's Eve.