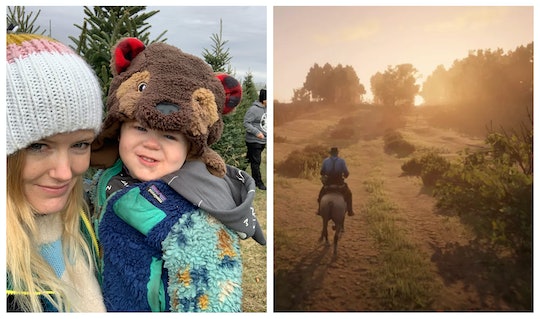 You don't have to rob a man and throw his body in a canyon to enjoy the majesty of the West, brought to life in cult video game "Red Dead Redemption 2." As a busy mom of two, I appreciate the complex story arcs and vast social geography within, and I am for sure impressed that Rockstar spent eight years developing a game that pushes the boundaries on what is possible for a person sitting on the couch with a console, but I'm mostly just interested in all those lovingly rendered blades of grass. Yes, you can kill and conquer and steal and gallop away, but the real beauty of "Red Dead Redemption 2" for me (other than the glitch that makes people punch their own horses) is its totally immersive brand of mindful escapism.

Since RDR2's October 2018 release, after getting two toddlers off to bed I've spent part of my evenings watching my husband toggle between the Legendary Bear Head hat and the Legendary Elk Half Chaps at the trapper post, and sit down to beans around the campfire with fellow outlaws as hero Arthur Morgan. He has shot countless police officers and bystanders, has robbed hotels for fun, has tended to his beard while I sat beside him on the couch looking on. What has captivated me, though, are the moments where he simply clops along the road on his horse, often in a soft twilight glow, or stops to brush his horse. While traversing mountain trails, branches will sweep across your eyes. Even when you misjudge things and ride into a tree, it all looks quite beautiful.

The game is ostensibly driven by a series of missions to re-up supplies for the gang of outlaws by hunting, robbing, and killing beyond the town of Valentine, but much of the action takes place on the way to and from these quests, surrounded by rushing water and enough tree cover for a lifetime's worth of forest bathing. There in the graphics, which recall true patterns I have seen in early morning light on snow, there is something utterly awe-inspiring. The game's developers have built in room in this world for you to simply be. As Andrew Webster explained in a review for The Verge:

While you go on long rides across the country, characters will talk about virtually everything: the struggles of the gang, personal relationships, future dreams, the constant encroachment of civilization. These moments would seem tedious if they weren’t so well-done.

Obviously sitting idly on the couch watching a man go about his adventures is not what Valentine's suffragettes are yelling for every day from their wagon, so I decided to find out what RDR2 would be like if I did enter the world with no other motive than general wanderlust. I didn't want to do all the missions, I just wanted to dandle about, feel the grass on my proverbial shins. Essentially, I was asking what it would be like to visit Westworld for the hiking.

My husband kindly loaded an auto-save so I wouldn't overwrite any of the pillaging or facial landscaping he had worked so hard on, and handed me the controller. Inside the game, I found myself in a town at high noon, and thought to whistle for my horse, as I had seen my husband do, instead hitting the trigger and shooting a man dead in bright daylight. I immediately had a bounty on my head and cops searching for me, so ran on through town looking for a horse or wagon to steal. I climbed onto a buggy and managed to ride halfway out of town before ploughing my horse into a shack (the steering is a little finicky, no?) and being shot to pieces by the sheriff. I died with the reins in my hand. Mindfulness: 0, rule of law: 1.

I found a rhythm, began to zigzag less, and just clopped along.

On the second try, my husband helped me plot a ride up into the mountains of the northwest, starting me out on the trail with my white horse and explaining the basics of horse care. From there, I found a rhythm, began to zigzag less, and just clopped along, following the bends in the map at lower left, and easing my steed down gullies. As I rode, other horsemen nodded hellos and clucked at their horses. A beggar cried out for help but I wasn't doing missions, you know, so I rode by without turning my head or feeling bad about it. I would simply ride until I ran out of land. Like Thelma and Louise.

The day turned golden as I reached a suspension bridge over a river, stopping partway over to listen, and the shadows drew long as I wound my way through a slot canyon. When I got stuck, I tried offering my horse food and medicine. Figuring out how the vantage control works, I saw my mistake (I was trying to ride through a boulder), mounted Old Silver again, and continued on into the night.

I reluctantly took him down in a shootout that saw him splosh face-first into the river, then drift away on the current.

Riding under a crescent moon, the pine needles on the ground lit by a soft glow, it almost felt like I was Arthur Morgan, and not, say, the kind of person who panics on a trail ride when their horse jumps into the bushes to snack. I felt like I had a good day's riding behind me, sensed the satisfied exhaustion of true adventure on my shoulders, so when I saw the glow of a campfire, I rode in to see if I could join.

The gentleman tending the fire threatened to kill me, so I reluctantly took him down in a shootout that saw him splosh face-first into the river, then drift away on the current. I brushed my horse back to white, then settled in under his tent, the stars peeking through at me. It was a good day. Review: RDR2 makes for a hell of a meditation session.

There are a number of mindfulness apps and games available — sometimes I open the Calm app just for the view of the gently rippling mountain lake. Neuroscientists at the University of Wisconsin-Madison designed a game that requires you to tap the console every five breaths and bat off distractions as you stroll through a landscape. The money-makers, though, tend to bill all the shooting as the main event, and the pastoral vistas as a perk of the interface (Rockstar Games was previously best known for developing Grand Theft Auto). What if the reverse was the case? Whether virtual or real, we clearly feel a need to get out in nature more; "Are you breathing a little and calling it a life?" Asked the plethora of Mary Oliver fans devastated by her death recently.

Or, as Jack London put it, "The proper function of man is to live, not to exist. I shall not waste my days in trying to prolong them. I shall use my time."

I'd like to think Jack would have enjoyed choosing a smart mustache trim for the ride.

The problem, as with any game requiring fine motor skills, was that while "Red Dead Redemption 2" offered me an escape, I couldn't clop aimlessly forever. There on horseback, I was already wondering if I should shoot the boar running across the screen to trade with the trapper, or if I would need to rob someone to come upon more horse medicine. At some point, Sil and I would need to eat. As in my life as an employee and parent and wife, distractions came flocking; life got in the way. Dressed in the trappings of a mom trying to get past the decathlon of pickup/dinner/bathtime/bedtime to 8 p.m., I don't want to kill or pillage, I just want 20 minutes to ride my damn horse.

Still, the record-setting "Red Dead Redemption 2," which took in $725 million on its opening weekend, and shipped 17 million units in its first two weeks on the market, per Forbes, is hitting a note, whether you're there to shoot hosts or canter under the stars until you run out of money.

Sit by a gushing river in my fancy bear-skin hat and watch the golden hour pass by? I'll hit the right trigger on that any day.