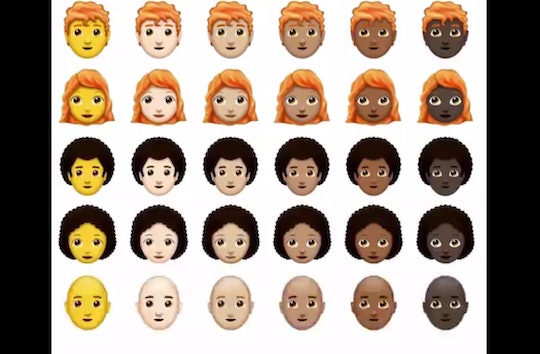 Redheads Are *Finally* Getting Their Own Emoji, & Twitter Is Lit

Smartphones have changed the way that people communicate with one another and it's not necessarily a bad thing. In 2018, photos tend to speak louder than words and that could not be more clear by your parent's obsession with Instagram. Emojis are now a part of the way people communicate, especially through text messages. And the more that people communicate with emoji, the more advanced and diverse that they become. Like this week, it was announced that redheads are getting their own emoji and people are incredibly happy that they will finally get to be represented through this fun way to communicate.

Those blessed with ginger hued hair will finally be able to tell friends how they're feeling (or let them know how much they love Ed Sheeran) through their emojis. The new update to the Apple and Android application will feature 12 new emoji faces with different skin tones and two different hair lengths as part of their new app update, according to E! News. Cue the applause.

There has been a lot of push for Unicode to create a redhead emoji — one petition, published to website, Change.org, garnered over 21,000 signatures begging Unicode to make the change. And last year, it was announced that a redhead emoji would be coming eventually if the ideas were approved, according to the Daily Mail. But now the time has finally arrived and the preview of the 12 fire-haired emojis look pretty amazing.

It really is about time that these redheads are graced with their own emoji. After all, according to Cosmopolitan, approximately 140 million people in the world have red hair (that's 2 percent of the world's population). And the diversity among skin tones with redheads matters — red hair can occur in any ethnicity, according to Cosmopolitan (although red hair is a little more common in people of northern or Eastern European ethnicity).

But because the push for red-haired emojis was so strong, and redheads are truly unrepresented, the gingers of Twitter are pretty stoked, taking to the website to share their excitement about the news.

Some Were Pretty Happy

Others Were A Little Skeptical

But People Knew That It Was About Time

But redheads are not the only people who should be super excited about the new emoji update. This new update will include 157 brand new emojis, according to Time, and include people with no hair (because your bald dad needs representation, too) and curly hair.

In addition to hairstyles, there will be some pretty special additions to the objects department, too. There will be a collection of super heroes from different genders and races to choose from (and super villains, too), according to The Telegraph, so you can act out your favorite Marvel films through text. And if you're more into the food emojis, a mango, a bagel, and a salt shaker emoji will be added with this new update as well (because you have to communicate your "saltiness" with your friends over text, somehow).

But don't head to your phone with excitement just yet. Unfortunately, the red-haired emojis (as well as all of the very new exciting objects) won't be released until June, according to Forbes, and will likely be available to use on your phone come August or September. So redheads and bagel lovers will have to wait six months or so until they finally can use these very special emojis in their Instagram captions or through texting.

But, judging from the reaction from redheads on Twitter, the wait will definitely be worth it when the update finally does arrive in the late summer or early fall. Believe me when I say that texting will be "lit" when that happens.