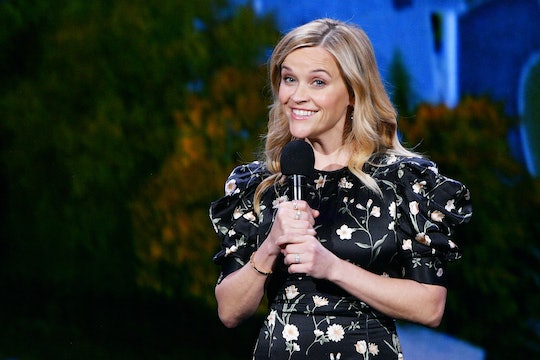 OK, I Can't Tell Who Is Who In This Photo Of Reese Witherspoon & Her Daughter

Talk about twinning. When it comes to famous families, there's almost nothing I love as much as watching the kids of our favorite celebs grow up, and sometimes, they offer us a pretty stunning throwback to what their parents looked like at their age when we first got to know them. Case-in-point: Reese Witherspoon and her daughter Ava look so much alike in photos from a recent event, it will make you think you're back in the mid-2000s.

Witherspoon gave birth to Ava with former husband Ryan Phillippe back in 1999, and if you're keeping up with the math, it means that she's now fully grown and on her way to college... but she's still making time for mom. In fact, according to Us Weekly, the pair appeared on the "blue" carpet for the premiere of the second season of Witherspoon's hit HBO show, Big Little Lies. It appears that Ava went as her date, and walked with her mom at Lincoln Center in New York City.

The two are apparently "best friends," a source reportedly told Us Weekly last year, and their relationship is stronger than ever, saying:" They just love being together... Reese and Ava talk several times a day and they go to each other for everything. [Ava] has learned so much by being with her mom and traveling the world with her."

And if photos from last night's event are any indication... these two are thick as thieves! And certified twins if you ask me... I mean, c'mon!

It seems that the feeling is mutual. Recently, USA Today reported Witherspoon said she "laid on the bed and cried" when Ava left for school. Though Witherspoon did not confirm where Ava chose to go to school (likely for privacy reasons) InStyle reported last year that she was looking at "the University of Washington, Berkeley, and a school in San Diego," and that she wanted to stay on the West Coast because she's "a California girl" at heart.

"It’s weird when your children go away to college," Witherspoon told Ellen DeGeneres when she appeared on her show a few weeks ago, Entertainment Tonight reported. "It’s hard. I never imagined how it felt for my mom. I might have gone into her empty room, laid down on her bed and cried when she went to college... It’s OK, she’s coming back. I thought she would be gone."

Along with an amazing daughter and best friend, Witherspoon has also said that Ava is an incredible big sister as well, particularly to her youngest half-brother, Tennessee. In an interview with Southern Living, she said that “Ava is like another parent to Tennessee, like his other mother," and that she thinks "sometimes he even gets confused — he told Ava ‘Happy Mother’s Day!’"

But Witherspoon isn't the only one gushing about their mother-daughter relationship. For her birthday this year, Ava posted a sweet photo of Witherspoon smiling behind a sparkler on a cake (BTW, it's hard to tell if it's her or Ava at first) and added the following:

My mom always reminds me, 'pretty is as pretty does,' and truth be told she is the prettiest woman I know. Happy mother’s day to my built-in best friend. Your drive to pursue your passions, your curiosity and willingness to learn, your care and compassion for others, and your strength to fight for what and who you care about all make me immensely proud to be your daughter. Love you always, Ava.

Along with being actual lookalikes, it seems this mother-daughter pair are also soul sisters at heart. Truly, they could not be more #goals if they tried.