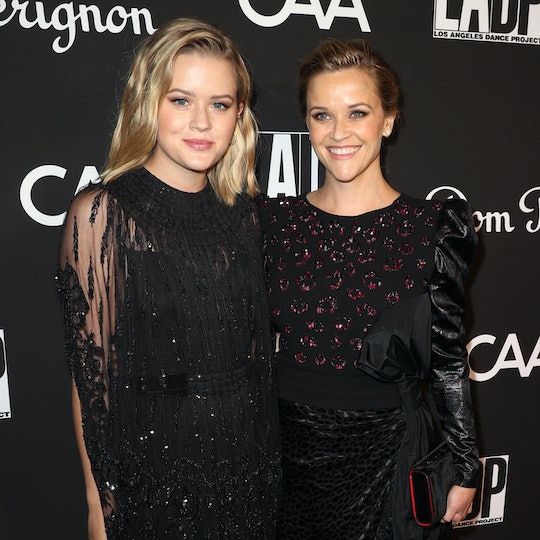 As difficult as it is to deal with the sleep deprivation and non-stop diaper changing and feeding involved with having an infant, the unfortunate reality is that, it doesn't really get that much easier as children get older. While the amount of grunt work may thankfully decrease, parenting is still hard work even when they're grown —particularly since the older they get, the better kids seem to be at tuning adults out. That's basically why Reese Witherspoon uses Snapchat to get her teens to clean their rooms these days, according to People, and honestly, it's a pretty genius idea.

Given that Witherspoon's youngest son, Tennessee, is only 6 years old, the actress clearly isn't off the hook from dealing with youngster sassiness. But since she's also a mom to 19-year-old Ava, and 15-year-old Deacon, well, she definitely has some parenting tricks up her sleeve. On Instagram Thursday, Witherspoon shared a giraffe-filtered photo of herself with a text overlay that read, "go clean your dirty room." Her caption? "How to talk to teenagers on Snapchat," along with the hashtag #momlife. And it sounds like she's definitely figured a few things out over the years: according to People, in a 2016 interview with TODAY's Jenna Bush Hager, Witherspoon said, "[my kids] will Snapchat me back, but they will not call me back."

While it's not clear if the strategy actually worked, it *is* a pretty great idea, and probably something other parents whose kids are similarly engrossed in their smartphones will want to try. And honestly, as a mom who is also constantly bothered by her kids' messy rooms, I have to say it feels pretty validating to hear that even Reese Witherspoon has a hard time getting her children to do chores. In fact, in an interview with Entertainment Tonight in 2016, she reassured moms everywhere that she too is always nagging, and joked,

I always say if you aren't yelling at your kids you're not spending enough time with them. [I'm] just telling everyone to clean up all the time.

Witherspoon also spoke for mothers everywhere when she admitted that mornings can be super hectic in her house. She told Entertainment Tonight,

People know not to call me before 8:15, because 8:15 is when everybody needs to either be on the bus or at school, and then my whole life starts at 8:15.

But even though she may have the same kind of common parenting gripes when it comes to her teens being not-so-neat, it sounds like Witherspoon still has a super-close relationship with her kids, even if the older two are almost grown. In fact, earlier this month, Witherspoon appeared on the cover of Vogue, and as part of the photoshoot, she posed with Ava, as well as her mom, Betty, and it was such a sweet moment. Magazine pages aside though, both Ava and Deacon, as well as Tennessee, have also long been a fixture of their mother's social media accounts.

In October, for one, Witherspoon gave Deacon a sweet shoutout in honor of his 15th birthday, and called him her "wonderful, creative, kind, talented boy," while a month earlier, she did the same for Ava, wishing her a happy birthday and writing, "You are the sunshine in my life!" Just before Christmas this year, she also posted a sweet photo posing with her kids and husband Jim Toth by their Christmas tree, and in it, the family-of-five looked like a happy, tight-knit bunch.

It's definitely not easy to be a parent sometimes, especially when it seems like your kids never listen to your instructions, no matter how many times you try to give them. And honestly, it seems technology has only made it easier for kids and teens to ignore mom and dad. But not only is Witherspoon's strategy is a clever way to try and work around that, it's also a reminder that even celeb moms have kids who never clean their rooms and refuse to call them back.