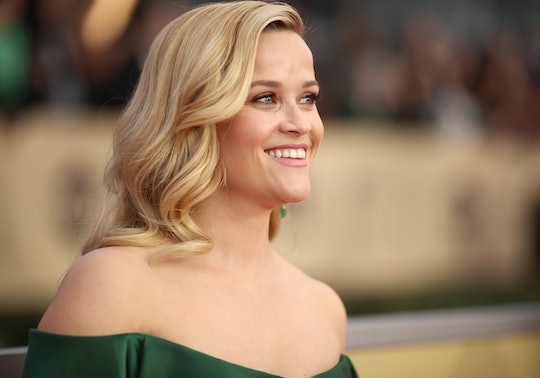 Teen trends these days can be pretty hard to understand, especially when you're a mom. TikTok, the phone application that is practically taking over the world, is one of those things. And mom of three, Reese Witherspoon is just a little confused. Luckily, Reese Witherspoon's son taught her about TikTok, which is so helpful for everyone else, too.

It's hard to stay in the loop when it comes to every single trend these days. But luckily, Witherspoon has her three kids — 20-year-old daughter, Ava, 15-year-old son, Deacon, and 7-year-old son, Tennessee — to help her with these things, according to TODAY. On Sunday, in an Instagram video, Witherspoon enlisted the help of her teenager, Deacon, to teach her about TikTok, which she had no idea about.

In the video, Deacon explains that TikTok is an app that allows users (including kids) to record short form videos on it, and encourages his mom to make some TikTok videos. And since Witherspoon is such a cool mom, it only makes sense that she would make the coolest TikToks. In the Instagram video, Witherspoon can be seen "hitting the woah" (that's a TikTok trend), learning some new dances from Deacon, and teaching him a few moves of her own.

The video is beyond adorable and likely encapsulates every mom's feelings and questions about the app that has completely taken over kids, their schools, and their free time.

The whole entire video is so precious. Witherspoon's jokes and "mom moves" are so endearing, and the fact that Deacon is so patient and such a good sport in the video proves that Witherspoon is doing something right with him, too.

Even Witherspoon's famous friends can't believe her talent, taking to the comments of the post to share their thoughts.

"I've watched this nine times," fellow actress (and mom) Mindy Kaling, wrote. "You are so funny. I can't believe how polite your son is."

"This is so good," TODAY show co-host, Jenna Bush Hager, exclaimed. "Please teach me how to raise such good kids."

And other moms are actually thanking Witherspoon for making this video explaining TikTok.

"I love that your son will actually be in a video with you," one follower wrote. "Teens today barely speak to us parents let alone agree to be in a video. Cute!"

Witherspoon has won an Academy Award and been nominated for countless others, according to CheatSheet. But her TikTok dances are probably the best work she's done, yet.

In case people were curious (like Witherspoon), TikTok is an app (like she said) where people record different videos of them lip synching or dancing to songs, and acting out skits, according to Vox. It's insanely popular and incredibly addicting to use, if only because it inspires people to get creative and get moving. Dance videos are an incredibly popular genre on TikTok, as evidenced by Witherspoon's Instagram video. They're super fun to learn and very entertaining to see everyone's different interpretations of those dances.

But is it safe for kids? Like any app, parents should use caution when it comes to allowing their kids to use it, according to Common Sense Media. All profiles are public on TikTok, until the user opts in to a private account, which means that strangers can initially watch these videos, too. TikTok is recommended for kids ages 13 and up to use, according to Common Sense Media, so parents should just use their best judgement when it comes time to allowing their kids to make their own TikTok videos.

However, if Witherspoon's Instagram video proves anything, it's that TikTok should definitely be the preferred app for parents. She is clearly thriving.