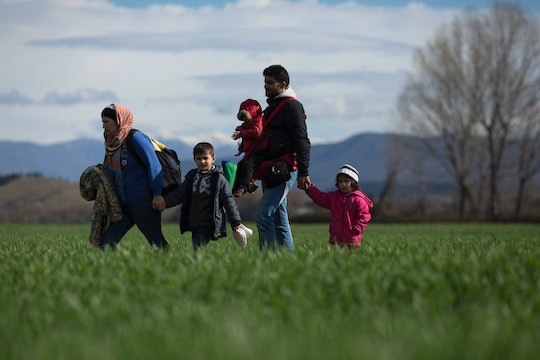 There are many public health issues when it comes to the European refugee crisis, like how to get doctors to refugees living in camps, treating health problems or injuries that refugees acquire while fleeing their home countries, and ensuring that they have access to care once they're given status in a country. But there's one health crisis that has some doctors and researchers in Sweden totally stumped. Apparently, there are thousands of refugee kids suffering from "resignation syndrome," but no one really knows what it is.

According to a new report in The New Yorker, it all began back in 2005, when a few hundred kids starting going completely unconscious while their families awaited word about their asylum status. The children would retreat to their beds, lie down, and eventually go unconscious; Some of their reflexes still work — their eyelids might flutter when doctors touch them, and their pupils react to light, but otherwise, the children are totally out. A doctor can lift up a child's arm and it just falls back to the bed. Most of the children affected by the condition subsequently end up in the emergency room where they are hooked up to feeding tubes.

Eventually, the children regain faculties in the order that they lost them. Adding to the mystery of "resignation syndrome"is that there are only reports of this happening in Sweden and mostly to immigrants from Kosovo, Serbia, Azerbaijan, Kazakhstan, and Kyrgyzstan.

What researchers have concluded is that this really is a psychological effect of the trauma of uncertainty. These kids just literally cannot go on. There have been reports from Holocaust survivors in a similar state, where some prisoners would just sit in a corner and not move or respond to stimuli.

It's odd that resignation disease is only occurring in Sweden, but new studies suggest that this condition, which is similar to catatonia, is a response to stress and depression that is somehow "contagious." That is, upon hearing or seeing the symptoms firsthand, other children are then just more susceptible to it. Initially, some doctors believed that the condition was "cultural," but no one in the refugee countries had ever heard of it. In other words, this extreme condition might be a specific response to a very specific refugee situation.

Sweden has been fairly welcoming to refugees, but has recently tightened its laws to allow only refugees fleeing an ongoing war. Throughout much of Europe, the country has become more divided when it comes to accepting more refugees. Apparently, children are feeling the tension. Just think: Making it all the way to Sweden from another part of the world, only to learn that you have to go back, would be a good reason to just shut down entirely. It's an extremely stressful way to live that seems to be eliciting a very extreme response in children.

"Resignation syndrome" is a pretty terrifying condition, especially since there doesn't seem to be a simple medical explanation. But it's definitely a sign that whatever these refugee children are facing in Europe is unlike anything people have been confronted with before, and that they need global attention more than ever before.