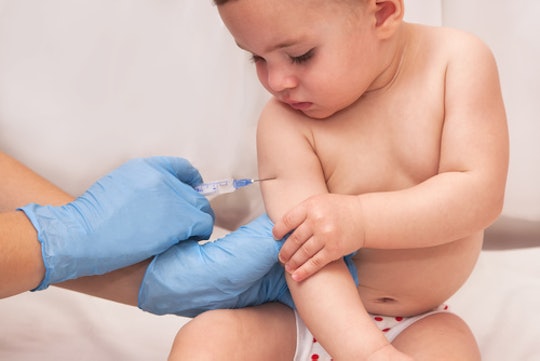 I used to think it was OK to delay vaccines. I thought there were too many vaccines, and that my kids might have an allergic reaction to one. I thought that it didn't matter if they got behind on their shots. Then I did my research. I learned that I was wrong.

I'll be honest: we refused some vaccines for our oldest son, including the Hepatitis B and Haemophilus Influenza Type B shots. We delayed others, including the vaccines for measles, mumps, and rubella. I believed Dr. Bob Sears, son of the attachment parenting guru Dr. William Sears, when he recommended that parents delay some shots, partly to avoid possible allergic reactions. Sears has also said that some vaccines contain risky ingredients, including bovine serum that could carry mad cow disease, and the dreaded aluminum. (It's worth noting that Sears might lose his medical license for giving a vaccine exemption to a 2-year-old without investigating his vaccine history.) I’d also gotten terrible advice from both the internet and my midwife, who believed that receiving the flu vaccine while pregnant both gave you the flu and poisoned your unborn baby.

We didn't realize it at the time, but we fit snugly in the demographic of parents who refuse or delay vaccines. According to a study in Human Vaccines and Immunotherapeudics, the parents of unvaccinated infants tend to be white, married, over 30, college-educated, and living in a household with an income of more than $75,000 a year. Our income was much lower than that, but other than that, we had all the classic characteristics of vaccine refusers, from our lily-white skin to our graduate degrees. We lived in a nice house in the suburbs, my husband had a decent position as a part-time professor, and we had two cars, dogs, and several vacations a year.

By making the choice not to vaccinate, you run the risk of sickening others who are not as privileged as you are.

We were privileged to be able to use our child's health as an excuse not to vaccinate, while simultaneously putting the sick at risk. Parents often use the excuse that modern medicine and their child's health render the danger of vaccine-preventable diseases moot. That's dangerously false, and it's even more dangerous when you take actual sick people into account. Bob Sears admits as much: “Should parents have the right to decline vaccines when doing so may put the health and safety of other children at risk? … Maybe a little.” Moreover, as the Centers for Disease Control (CDC) says, 1-5% of children, depending on the vaccine, will fail to develop immunity. This doesn’t count those who simply cannot be vaccinated: those who are immunocompromised by cancer, bone marrow transplants, severe HIV, chemotherapy, or allergies to vaccine components. Your child’s health makes him privileged. By making the choice not to vaccinate, you run the risk of sickening others who are not as privileged as you are.

We also had money. Not a lot of it, but we were paying the mortgage, the health insurance companies, and the good doggie spa to care for our pets when we went on vacation. We could literally afford not to vaccinate, because we had health insurance should any issues arise. And we were refusing vaccines at the risk of the health of lower-income children of color. As Peter Hortez, the head of the Sabine Institute for Vaccine Research, puts it, even though most anti-vaxxers are white, when vaccine rates drop, the people who hurt the most will be “people who live in poor, crowded conditions. So it’s going to affect the poorest people in our country.”

Not only could we pay for the health consequences of not vaccinating if they arose, but we could also afford to find a doctor to treat us, because if you do not vaccinate, that means you have the resources to shop around: 1 in 5 pediatricians reject unvaccinated patients. Most poor people don't have the luxury of interviewing different pediatricians and family physicians or taking time off work to pay for appointments and travel costs, not to mention co-pays.

And finally, we were privileged enough to be well-educated. Educated people, statistics show, are more likely to stand up to doctors, and less likely to be compliant patients. People with higher education levels are also less likely to vaccinate. They have the skills to seek out research on the internet, even if that research is laden with misinformation. Phrases like “pharmaceutical-military-industrial complex,” “immune system overload,” and “possible adverse reaction" sound just smart enough to resonate with them, and give them a reason to stand up to their doctors.

Our skin color, class, education status, and health insulated us from the pressing need to vaccinate. We were putting other kids at risk in order to help our own, or so we thought. We were upping the risk of spreading vaccine-preventable disease in our community, and our son’s good health and our insurance insulated us from caring. Luckily, after we didn’t see the dire consequences and vaccine side effects in the children around us, we re-evaluated our vaccine decisions. We began vaccinating our oldest son on the CDC schedule, and after some time, we have managed to get him completely caught up. I’m glad we’re playing our role in one of the most successful public health initiatives of all time. I’m also glad we’re not ignoring the needs of our community. And I’m glad we’re not ignoring those needs by throwing our privilege around.