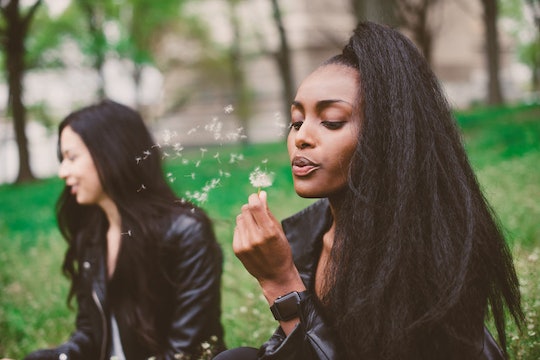 "Positive Thinking" From Other Moms Can Be Super Alienating

“Oh no, don’t say that! You’re a great mom. You can do it!!” My friend meant to comfort me with her wide-eyed declaration of my greatness, except the problem was that I never said that I wasn’t a great mom. I had merely said that during this everlasting and bitterly cold Midwest winter, my kids’ cabin fever has reached an all-time high and I wasn’t sure I was going make it to Spring. Was I being hyperbolic? Sure. Negative? I suppose. But I wasn’t sure how my friend had interpreted what I said as a heartbroken confession of my ineptitude as a mother. When I asked her about it, her immediate back-pedaling made it clear that it wasn’t about what I said, it was about how I said it. I wasn’t being “positive” and that made her uncomfortable and so she felt the need fix it.

Society seems to have decided that relentless positivity is the one-size fits all solution to emotional well-being. At its best, positive thinking is a powerful way of using one’s mindset to grow and flourish as a person, but it also has a dark side. Too often positive thinking can become victim blaming or, as my friend inadvertently demonstrated to me, an implicit type of mom-shaming.

When it’s someone else’s struggle that reminds us that bad things happen, so often we double-down on our positive mindset and deny that sometimes heartbreak, disappointment, and failure are inescapable.

While this feels like a straightforward and dare I say “positive” life strategy, the problem is that unfortunately, reality isn’t always happy. Bad things happen to good people and there are a lot of variables in life that are out of our control. But if we are trying really hard to only see the positive, being confronted by negative realities can threaten our carefully constructed perspectives. And when it’s someone else’s struggle that reminds us that bad things happen, so often we double-down on our positive mindset and deny that sometimes heartbreak, disappointment, and failure are inescapable. We assure ourselves that bad things don’t just happen, negativity isn’t a given, if someone has a problem, its because they themselves are the problem.

I’ve found that this kind of victim blaming is especially prevalent during motherhood when our deepest fears about all the bad things that might happen are heightened and the truly uncontrollable nature of life has never felt clearer. We’ve all heard the accusations before, when a child is hurt the internet demands to know where his mother was. When a little girl goes missing, we examine the mother’s parenting choices that must have led to this. Positivity morphing into mom shaming isn’t just reserved for tragedies and national news stories, it is as ordinary as denying our friends the opportunity to vent and complain because their misfortunes would pollute our otherwise positive environment. Because an upbeat dismissal of our friend’s feelings is really all that our insistence on positivity really communicates.

If I say my life is busy and stressful, who are you to tell me that it’s not?

Whenever I mention any stress induced by my busy life as a work-from-home mother I often get the response from well-meaning friends telling me that actually all of my stress is due, not to the dozens of plates I‘m spinning, but rather to how I spin my plates. Or in their words, “You just need better time management systems.” None of this is said with malice or the intent to shame me, rather it is well-intended advice arising from a place of positive “No need to be negative! You can do anything!” thinking with a hefty dash of has-no-idea-what-I’m-going-through-privilege.

But whatever they are trying to communicate, what they are actually communicating is, “Smart people don’t have stupid problems and your problem is stupid.” Not only do I feel ashamed of my inability to be a better mother, I also feel a little gas-lit about my own life. If I say my life is busy and stressful, who are you to tell me that it’s not?

We have to ask ourselves at what point our “positive encouragement” is our own discomfort with another’s limitations disguised as a motivational speech. Maybe they don’t even consider what they are dealing with limitations, or maybe they do, but they simply don’t feel the need to put a positive spin on things, because maybe, they have already accepted what we all have to accept: as long as negative realities exist, being positive all the time simply isn’t honest.