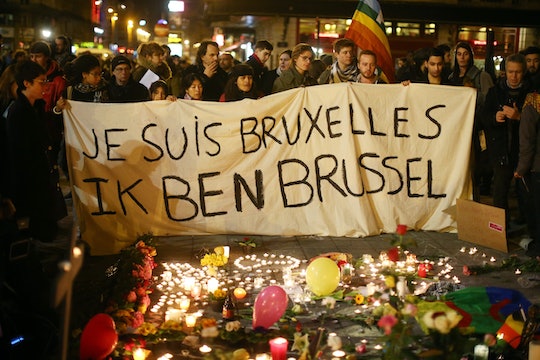 Remembering The Brussels I Fell In Love With

Hanging above my fireplace is my most favorite picture in the entire world, one I snapped during a visit to Belgium when I studied abroad in college. It was a time in my life when I was carting around a giant, awkward camera that had a card in it with memory space so small we'd likely laugh at it today, but still, I was so grateful for the pictures I took during my trip, because they were some of my happiest memories of my time there. And when news of the Brussels attacks this morning in Belgium, a city and country I love and hold so dear, broke, I felt like the one place I was holding on to as a mecca of peace and camaraderie came shattering down to its knees.

That picture of Brussels hanging over my bed is one I took because it represented the most beautiful place in the world to me. During my trip there, we visited both Bruges and Brussels, and I was blown away by the beauty and tranquility of the country where so many of my ancestors lived. My maiden name is "Saelens," which is about as Belgian as you can get, and I passed so many buildings emblazoned with my last name on the side that I felt like I was coming home in such a way that felt my soul already knew this place.

I remember thinking that if heaven was real, this would be what it would look like to me.

As the rest of our study-abroad group meandered around the town, I remember, very vividly, stopping to take that picture. The water was sparkling and a boat gently glided along carrying a couple with a picnic basket, a willow tree in the background gracefully dipped its leaves into the restful waters, and a swan drifted by peacefully. I was just a visitor in a city and country so far from my own (but one that meant so much to my family and our history), but I felt tears prick my eyes at the beauty of the scene, and I remember thinking that if heaven was real, this would be what it would look like to me.

I love that picture so much, even though I know it looks kind of cheesy, because it never fails to instantly transport me back into that moment of peace and tranquility and breathtaking beauty.

I've never forgotten that moment or that day, and I've held onto it in my mind as proof that there is beauty in the world, that goodness exists, that peace is possible. I've come back to that feeling again and again, whenever I feel lost. I felt so strongly about that the beauty I found in Belgium that I even blew up the picture and had it framed to hang above my fireplace in my living room. I love that picture so much, even though I know it looks kind of cheesy, because it never fails to instantly transport me back into that moment of peace and tranquility and breathtaking beauty.

Belgium is where I had my first beer, where I was introduced to the magic that is a street-side Belgian waffle (topped with strawberries, drizzled with melted chocolate, and dusted with powdered sugar) — a magnificent experience that simply can't be recreated anywhere else. Brussels is a place so rich with history, and I remember feeling like everywhere I looked was a gift — because it was. But on March 22, dozens of people lost their lives, hundreds more were wounded, and thousands had a loved one stolen from them much too early, much too soon.

I know that as I sit here writing this, half a world away, I am privileged to have the memory of a city so beautiful so clearly etched into my brain, untarnished by the devastation caused by the attacks Tuesday. I can only imagine what it's like to be on the ground there right now, and I'll be honest: I don't know a lot about what security has been like there lately or any of the current political intricacies of the place. My view is mostly an outsider's, and I can't and wouldn't want to lay claim to the experience of residents and ex-pats.

I can only say that when I walked the tunnels that still remain of the Ypres Salient battlefields, visiting the trenches that soldiers trudged through in knee-high mud and the hushed woods where so much war took place, I thought about how far the world has come. Yet now — today — it seems like we haven't come very far at all. It's so hard to understand how terror can happen, how it keeps happening, and though, logically, I know that there is an explanation for terrorism and why people do horrible things to one another, I admit that I've held out hope that there are some places evil won't be able to touch. Brussels was that place for me. It was a city too magical to be touched by evil.

I can't help but hope that the magic I felt during my time there will sustain the people of Brussels today and in the days to come. That the strength I felt pouring out of the streets of a city I walked so many years ago is rising with righteous fury again today. I have to believe that magic like that can't be lost. I know that the attacks on Brussels today were meant to steal it, but I don't think it can be stolen.

I've held on to those memories of traveling to Belgium as some of the happiest in my life, and today I'm hugging them a little tighter. I look at the picture in my living room and am more determined than ever to go back soon, and bring my kids. I don't need Brussels to be the tranquil idyll I remember; it doesn't owe me anything. If anything, I owe it. I hope that in the weeks ahead the people of Brussels find the peace that their city has offered to me, a descendant but really a foreigner, for so many years.