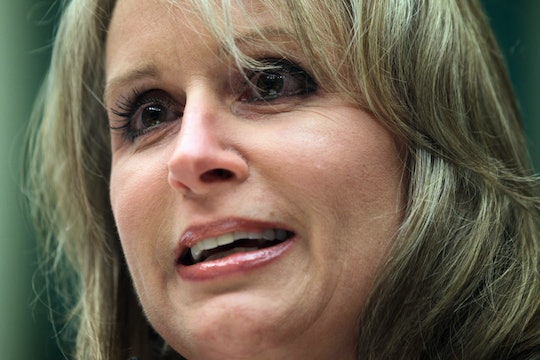 Renee Ellmers Claims Trump Accusers Allegations Are 'She Said, He Said' & Gets It So Wrong

On Sunday morning, during a CNN "State of the Union" interview with host Jake Tapper, North Carolina congresswoman Renee Ellmers tried to downplay the severity of the sexual assault allegations against Republican nominee Donald Trump — only to get seriously shot down by Tapper. Ellmers, a Trump surrogate, claimed that the Trump allegations were a "'she said, he said' situation," and that she wasn't "going to debate who’s telling the truth."

According to The Telegraph, however, Trump and his lawyers have repeatedly denied the allegations, and Trump has claimed they have evidence to prove it. At a West Palm Beach rally on Friday, Trump told the crowd, "These vicious claims about me of inappropriate conduct with women are totally and absolutely false." In that sense, the world has definitely heard the "he said."

When it comes to the "she said," though, it really should be more like "they said." According to Mother Jones, as of Sunday, 12 women have come forward with assault allegations against Trump, which — as Ellmers pointed out — is no small claim. Talk of the accusations reached a fever pitch after a 2005 interview emerged in which Trump said, "I'm automatically attracted to beautiful women — I just start kissing them, it's like a magnet. Just kiss. I don't even wait. And when you're a star, they let you do it. You can do anything. ... Grab 'em by the p-ssy."

After Tapper corrected Ellmers, however, she quickly changed gears, switching to the topic of assault accusations against former president Bill Clinton. "Let's be fair," she said. "We have the same situation with the Clintons, both with Bill Clinton, of course, and then of Hillary Clinton defending and attacking those women as well."

The thing is, Democratic nominee Hillary Clinton is the one running for president, and no one has accused her of sexual assault. While her response to some accusers was at times less than positive (she did call Gennifer Flowers "some failed cabaret singer" when news emerged of her allegations, according to CNN), there there is no proof that she intimidated or attacked any of Bill's accusers.