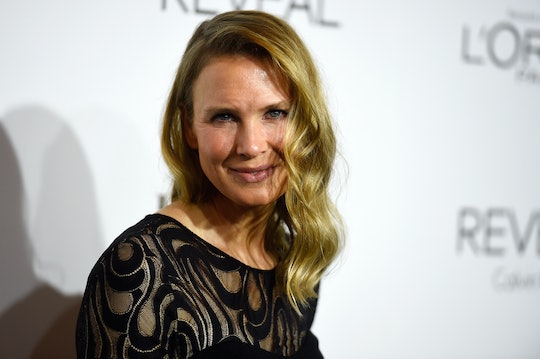 In an op-ed for The Huffington Post, Renée Zellweger says she's had it with ageism in Hollywood. Remember back in 2014 when she arrived at ELLE's Annual Women in Hollywood party and the tabloids ran amok with rumors that she'd had major plastic surgery? Remember that piece in Variety that wondered if she could even be the same actress after debuting such a different look?

Zellweger, 47, is an Academy Award winning actress most well-known for her role in Bridget Jones's Diary, (which she's reviving this year!) playing the lovable, relatable, somewhat accident-prone British gal herself (a testament to Zellweger's acting chops because she's not British — she was born in Texas!).

Her character in Bridget Jones would probably be very proud of the essay the actress penned for The Huffington Post this week, calling out the tabloids, Hollywood and our culture in general for its ageism, cruel, unrelenting focus on appearances, and the expectation of bearing it all in the pursuit of fame (literally and figuratively).

Zellweger asserted that she isn't writing her response to "come clean" about anything — because she doesn't have anything to come clean about:

Not that it’s anyone’s business, but I did not make a decision to alter my face and have surgery on my eyes. This fact is of no true import to anyone at all, but that the possibility alone was discussed among respected journalists and became a public conversation is a disconcerting illustration of news/entertainment confusion and society’s fixation on physicality.

She also weighed in not just on the detriment this type of focus does to women who are in the spotlight because of their careers, but the young women who are exposed to the barrage of headlines everyday, just by living in the world:

Too skinny, too fat, showing age, better as a brunette, cellulite thighs, facelift scandal, going bald, fat belly or bump? Ugly shoes, ugly feet, ugly smile, ugly hands, ugly dress, ugly laugh; headline material which emphasizes the implied variables meant to determine a person’s worth, and serve as parameters around a very narrow suggested margin within which every one of us must exist in order to be considered socially acceptable and professionally valuable, and to avoid painful ridicule.

Zellweger closed by asking that those who write the disparaging headlines to ask themselves what it means that such headlines sell. What does it say about us as a culture that we grasp for those drama-filled stories that "call-out" women?

Maybe we could talk more about why we seem to collectively share an appetite for witnessing people diminished and humiliated with attacks on appearance and character and how it impacts younger generations and struggles for equality, and about how legitimate news media have become vulnerable to news/entertainment ambiguity, which dangerously paves the way for worse fictions to flood the public consciousness to much greater consequence.

And Zellweger hasn't been the only woman to feel this unfair pressure in Hollywood (though it definitely happens well outside of Hollywood). Here are a few other celebs who have spoken out.

Jennifer Aniston Wrote An Op-ed, Too

Jennifer Aniston wrote an op-ed in The Huffington Post last month that spoke to many of the same points as Zellweger's. After the paparazzi got a shot of her on the beach, they began speculating that she was pregnant. Aniston, 47, wrote the op-ed to not just respond to the rumors, ("I am not pregnant," she writes, "What I am is fed-up.") but to call out the industry on its ageism, sexism, and and the downright dangerous paparazzi culture of tabloids.

The objectification and scrutiny we put women through is absurd and disturbing. The way I am portrayed by the media is simply a reflection of how we see and portray women in general, measured against some warped standard of beauty.

Aniston also made a point that any woman can relate to — not just one who gets hounded by paparazzi day in and day out: the unforgiving focus on women's bodies is exhausting, and even if the majority of us aren't worrying about being photographed every second of every day, we all know that feeling of being hyper-vigilant about how we look:

I resent being made to feel “less than” because my body is changing and/or I had a burger for lunch and was photographed from a weird angle and therefore deemed one of two things: “pregnant” or “fat.”

Grey's Anatomy star Ellen Pompeo joined the chorus of women calling out our culture's apparent war on women, telling People that she's stayed on Grey's Anatomy for more than a decade because she was afraid she wouldn't get roles because of her age. Pompeo, 46, who got her start in her late 20s, said that “[At 33, I] was wise enough to know my clock was already ticking in Hollywood.”

As the years went by and Grey's came up for renewal, she stayed on "purely based on age", she told People — fearing it unlikely that she'd be able to get as good a role again in her 40s. Of course, she loves playing Meredith and feels lucky to be able to continue doing so — but she didn't sugar coat the reality:

Watching myself age on TV is miserable. To be honest, it’s the toughest part of my job.

Back in 2011, goddess of stage and screen Meryl Streep told Vogue that despite her nearly 4o-year career in Hollywood, which has garnered her countless awards (she's the most nominated Academy Award actress in history) ageism has even plagued her. Now 67, Streep recalled the year she turned 40 when she said, “I remember turning to my husband and saying, ‘Well, what should we do? Because it’s over.’” She then told Vogue that in 1981 she was offered three roles in three different movies: all of which were witches.

Inside Amy Schumer devoted an entire sketch to ageism in Hollywood, which featured Tina Fey, Julia Louis-Dreyfus, and Patricia Arquette having a picnic in Central Park, where they had been banished due to no longer being perceived as sexy enough for film and television. The sketch is pretty raunchy (and NSFW) but it directly calls out the double standards in Hollywood for women when it comes to attractiveness and sexuality, and gives an unflinching look at the reality of women not just in Hollywood, but everywhere.

These actresses, but also women everywhere, are hurt by the idea that women are only valuable as long as they don't age. Women are more than just pretty objects, and the statements by the above women make that so clear.