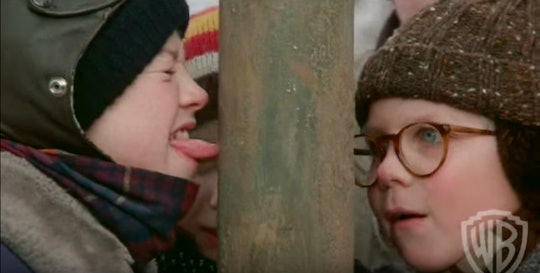 'Rent' & 'A Christmas Story' Are FOX's Next Live Musicals

Musical theater is kind of an obsession. Whether you're an undying Broadway fan or have ever loved a children's Disney movie, there is no denying that musicals are fun and catchy. But this year, proud musical theater lovers and reluctant musical lovers alike are in for a treat. This because FOX just made some pretty huge announcements, as Rent and A Christmas Story are FOX's next live musicals, set to be adapted for television. Yeah, it's pretty exciting.

On Friday, FOX announced that A Christmas Story would be set to debut this holiday season in a 3 hour live broadcast to air this December. But just in case you couldn't be more excited for this live musical adaptation of the beloved film from the 1980's, FOX announced that they also would be producing the beloved musical Rent for television screens. According to Variety, Rent will be FOX's next live musical production — although an air date has not yet been announced for the musical. More details about this very exciting (and slightly risqué) musical are set to be announced at a later date.

The two musicals could not be any more different, which makes this all the more exciting of an announcement for all audiences.

According to Variety, Marc Platt (who produced the acclaimed Grease: Live ) will executive produce both live performances. Meanwhile, La La Land composers Benj Pasek and Justin Paul will compose new songs for the live adaptation of A Christmas Story. This means that musical theater buffs are practically shaking from excitement right now.

While Rent and A Christmas Story are loved by so many, they're loved by so many people for different reasons. A Christmas Story is a cherished family movie and is often referred to as "the greatest holiday movie ever" due to the fact that it captures the anxieties of the holidays through the eyes of a child so well. Meanwhile, Rent is provocative, tackling real world issues of struggling artists in New York City with catchy lyrics that have been loved by high school teens for years. Seriously, who hasn't gone through a Rent phase?

A Christmas Story made its Broadway debut in 2012 and still regularly tours across the United States around the holidays. Rent, which opened on Broadway in 1996, is currently on the road for its 20th Anniversary Tour. But for those who miss the opportunity to see these shows will finally have the ability to do so when they air on television screens everywhere.

So get your leg lamp out of storage and dig up that old Rent t-shirt you begged your mom to buy you when you saw it on Broadway for the first time — because these two exciting musicals are headed to your living room.