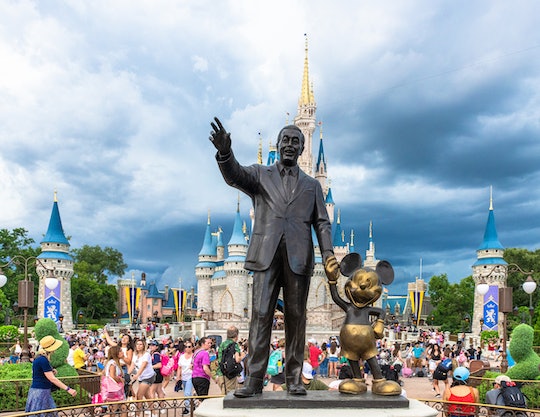 For more than a month, the gates at Walt Disney World have remained shut due to the global coronavirus pandemic. And while Disney World won't be opening tomorrow or even next week, a Florida task force has begun to look at what a reopened park might look like. Guidelines released by the Orange County Economic Recovery Task Force suggest guests may see noticeable changes as reopening Disney World could include social distancing line markers for ride queues.

Members of the Orange County Economic Recovery Task Force — which include Thomas Mazloum, Walt Disney World Resort's senior vice president for Resorts & Transportation Operations — met in April to unveil and discuss initial guidelines for reopening various businesses in Orlando. For large theme parks like Walt Disney World and Universal Orlando, the task force has proposed guidelines that would require tape markings in ride queues to ensure patrons stand six feet apart while they wait. Many Americans may already be familiar with the concept of social distancing lines as many grocery stores have instituted them as a precaution.

The task force also proposed mandating that large and small theme parks reopen in phases. The first phase would see the parks welcoming just 50% of their normal capacity. Guest capacity would increase to 75% in the second phase, followed by a return to 100% capacity by the third phase of reopening. However, because infection rates and community spread remain nearly impossible to predict, the task force has not assigned any set dates or timeframes for its phases of reopening.

In May, Disney announced it would employ a similar phased approach when reopening Shanghai Disneyland on May 11 as a government mandate would require the park operate initially at 30% visitor capacity. Out of an abundance of caution, Disney CEO Bob Chapek said the park would initially operate below 30% operation capacity and slowly ramp up to that threshold over several weeks, as CNBC reported.

In an effort to ensure the park does not receive more visitors than it can admit, Shanghai Disneyland guests and annual pass holders will be required to purchase admission tickets or, in the case of pass holders, make reservations, prior to their arrival at the park, according to CBNC. Going forward, tickets and reservations will be tied to specific dates for entrance.

Additional guidelines proposed for the reopening of large theme parks in Florida included instructing staff to regularly wipe down surfaces at random and encouraging staff aged 65 or older to stay home until the parks have reached phase three of their reopening.

According to the task force, all theme park employees would be required to wear face masks and have their temperature checked prior to each shift. Any employee found to have a temperature above 100.4 degrees would not be allowed to enter the park. Touch-less hand sanitizers would be required at the entrance and exit of each ride or attraction as well as at each ticketing entry and turnstiles. A final mandate suggested requiring railings and surfaces be wiped down "after every use."

Similar procedures are expected to be enforced at Shanghai Disneyland when the park reopens later this month. According to CBS News, both guests and staff will be required to wear face masks at all times, except when dining, and temperature checks will be mandatory for all. Shanghai Disneyland cast members will also receive training on how to conduct contactless guest interactions, as well as proper cleaning and social distancing procedures.

While Disney Parks has yet to announce a potential reopening date for either of its U.S. locations, PopSugar reported that Orlando Mayor Jerry Demings said June seemed a "more realistic" timeframe for Disney World's reopening than May. Still, nothing has been made official and both Disney World and Disneyland remain closed.

This article was originally published on April 29, 2020