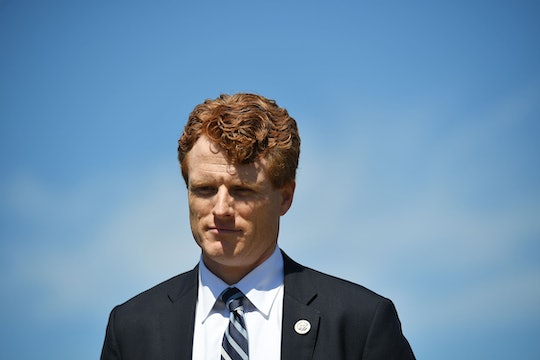 "I Want You To Know Why": Rep. Kennedy Read Letter To Kids About Trump's Impeachment

While speaking from the House floor ahead of Wednesday's impeachment vote, Rep. Joe Kennedy moved to address not American voters or his fellow Congressional members, but two people closest to his hear: his children. In reading aloud a letter to his nearly 4-year-old daughter and soon to be 2-year-old son, Kennedy explained his impeachment vote.

"Dear Ellie and James, this is a moment that you’ll read about in your history books," Kennedy began. "Today, I will vote to impeach the president of the United States, and I want you to know why." The Massachusetts representative went on to claim President Donald Trump had broken laws, threatened the country's security, and abused the Office of the President of the United States, which he called "the highest and most sacred office in our land."

"I want you to know that it does not feel good," Kennedy said of having to vote on articles of impeachment against a sitting president. "I can't stop thinking about the cost to our country — not just the impeachable offenses, but the collateral damage of a president who uses power like a weapon against his own people, erodes our decency, degrades our dignity."

The House of Representatives passed two articles of impeachment Wednesday in votes that fell largely along party lines and have made Trump the third president in U.S. history to be impeached by the House. According to CNN, the House voted 230-197 in favor of charging the president with abuse of power and 229-198 in favor of obstruction of Congress.

However, Wednesday's vote in the House was not a vote on removing Trump from office. That task falls instead to the Senate, which is expected to pick up impeachment proceedings in January and hold a trial on whether or not to convict and remove the president from office. It's worth noting that while Democrats hold a majority in the House, they do not hold a majority in the Republican-controlled Senate.

Additionally, Florida Rep. Debbie Wasserman Schultz said that while contemplating her vote on the matter, she decided she wanted her daughter to be able to tell her future children that, "Grandma did the right thing because in America no one is above the law."

While acknowledging that Wednesday's vote would be a sad day, Michigan Rep. Dan Kildee told the House he knew that someday his grandchildren Caitlin and Colin would ask him about this moment. "They'll ask about the time a president put himself above the law and they'll want to know what I did to stop him," he said. "And I will have an answer for them. Today I vote to uphold the Constitution, I will vote to impeach Donald Trump."

It was a message similar to the one behind Kennedy's letter to his own children. "I don't yet know how they will tell the story of this era, but I want to tell you the story of this day," Kennedy told his two children from the House floor Wednesday. "Let the record show that today, justice won, that we did our job, that we kept our word, that we stood our sacred ground. Let the record show that we did not let you down."