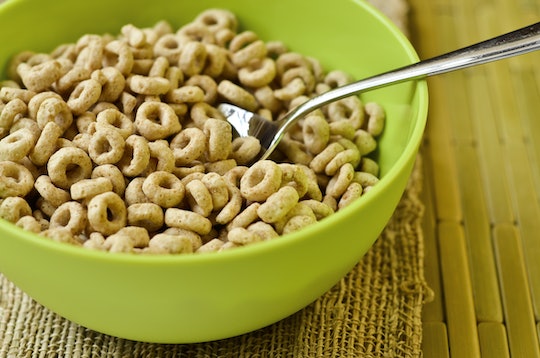 Back in August 2018, a study conducted by the non-profit Environmental Working Group (EWG) found trace amounts of glyphosate, a herbicide, in products like Cheerios and Quaker Old Fashioned Oats, for example. Now, almost one year later, the EWG concluded that popular breakfast cereals still show trace amounts of weed killer and the finding has undoubtedly reignited food safety concerns for many parents.

Monsanto, an agrochemical and agricultural biotechnology corporation, began selling a popular weedkiller called "Roundup" in 1974, a product that was initially praised for being less environmentally toxic than other herbicides at the time, according to NPR. Crops were then genetically modified to "tolerate" Roundup's key ingredient, glyphosate, which ultimately allowed farmers to kill those pesky weeds without damaging their harvests, as NPR explained.

The public's view of glyphosate saw a major shift, however, when The International Agency for Research on Cancer (IARC) concluded that it was a "Group 2a carcinogen, a substance that probably causes cancer in people," according to Reuters. Legal issues then began to crop up, with numerous people filing lawsuits against Monsanto, alleging that Roundup caused their cancer diagnoses, according to CBS News.

As for what all of this has to do with breakfast cereal? In August 2018, EWG released a study that had tested 45 oat-derived products geared towards children, and found that all but two had levels of glyphosate present, according to The Guardian. That 2018 report found particularly high levels in Quaker Oats, General Mills, and Nature Valley products.

General Mills issued the following statement at the time, saying:

General Mills' top priority is food safety and has been for over 150 years. Most crops grown in fields use some form of pesticides and trace amounts are found in the majority of food we all eat. Experts at the FDA and EPA determine the safe levels for food products. These are very strict rules that we follow as do farmers who grow crops. We continue to work closely with farmers, our suppliers and conservation organizations to minimize the use of pesticides on the ingredients we use in our foods.

Quaker Oats said in a statement via email:

We proudly stand by the safety and quality of our Quaker products. All of our products are safe and in compliance with the applicable standards set by the U.S. Food & Drug Administration (FDA), the U.S. Environmental Protection Agency (EPA), the California Office of Environmental Health Hazard Assessment, Health Canada and the European Commission. Quaker has a world-class team of experts in food safety, quality, research, science and nutrition who are constantly assessing the food landscape to ensure we maintain the safety and trust consumers have come to expect from the Quaker brand for more than 140 years.

Then, in October 2018, the EWG tested 28 additional products and found levels of glyphosate above its health benchmark in 26 of those samples, according to USA Today.

"The tests detected glyphosate in all 28 samples of products made with conventionally grown oats. All but two of the 28 samples had levels of glyphosate above EWG’s health benchmark," the EWG said at the time, according to the Organic Consumers Association.

Following these reports, the EWG released another study on June 12, 2019, which examined 21 products that were made by "General Mills, including six varieties of Cheerios and 14 of General Mills' Nature Valley products, such as Nature Valley granola bars," according to CBS News.

EWG expanded on the results in a statement shared to its website, writing: "The new tests confirm and amplify EWG’s findings from tests in July and October of last year, with levels of glyphosate consistently above EWG’s children’s health benchmark. The two highest levels of glyphosate were found in Honey Nut Cheerios Medley Crunch, with 833 parts per billion, or ppb, and Cheerios, with 729 ppb. The EWG children’s health benchmark is 160 ppb."

In response to the latest findings, General Mills directed Romper, via email, to its original statement on the matter.

It's understandable that the EWG's reports are alarming to some parents and consumers, especially in light of the recent settlements against Monsanto. But is glyphosate really dangerous? There are conflicting reports on the subject.

The Environmental Protection Agency claimed in December 2017, for example, that glyphosate "is not likely to be carcinogenic to humans." It also noted that, "just because a pesticide residue is detected on a fruit or vegetable, that does not mean it is unsafe."

"Very small amounts of pesticides that may remain in or on fruits, vegetables, grains, and other foods decrease considerably as crops are harvested, transported, exposed to light, washed, prepared and cooked," the EPA stated on its website. "The presence of a detectible pesticide residue does not mean the residue is at an unsafe level. USDA’s Pesticide Data Program (PDP) detects residues at levels far lower than those that are considered health risks."

"It is possible for trace amounts of glyphosate to remain on foods after they have been harvested. As with any pesticide, small quantities known as 'residues' can sometimes be present on produce after it leaves the farm, and the EPA has developed strict limits (or 'tolerances') for them," Sims explains.

She adds, "The FDA and USDA share responsibility for monitoring levels of pesticide residues in and on foods. Pesticide residues, if present at all, should be within safe levels (as determined by the EPA) for both adults and children."

That being said, there are still 11,000 pending cases against Monsanto at the time of this writing, as CNN noted, while a February 2019 study claims exposure to glyphosate can raise a person's cancer risk by 41 percent. And it's fair to wonder why certain cereal brands haven't erred on the side of caution until the debate surrounding glyphosate reaches a conclusion.

As for the EWG, it argues that the "only way to quickly remove this cancer-causing weedkiller from foods marketed to children is for companies like General Mills and Quaker to use oats from farmers who do not use glyphosate as a desiccant."

Despite the EWG's warnings, Sims argues that "parents should not be concerned with giving their children these cereals or snacks" or consuming the products themselves, for that matter.

"These foods are regulated for safety," she tells Romper. "The use of pesticides, including glyphosate, is closely monitored and regulated by the U.S. Environmental Protection Agency (EPA), U.S. Food and Drug Administration (FDA) and the U.S. Department of Agriculture (USDA)."

If you're still concerned about glyphosate and your children's breakfast foods after reading EWG's reports, don't hesitate to reach out to a trusted medical professional for further guidance.