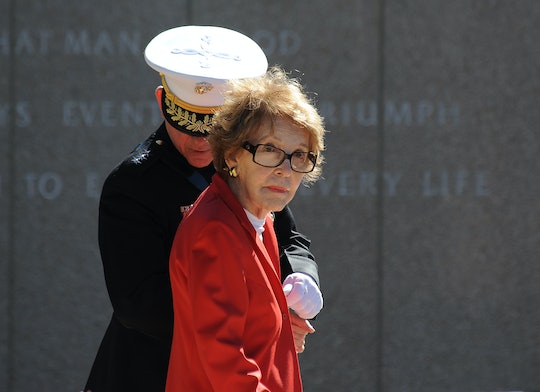 REPORT: Nancy Reagan Has Died At The Age Of 94

"Mrs. Reagan will be buried at the Ronald Reagan Presidential Library in Simi Valley, California, next to her husband, Ronald Wilson Reagan, who died on June 5, 2004," representative Joanne Drake wrote in a statement, according to NBC News. "Prior to the funeral service, there will be an opportunity for members of the public to pay their respects at the Library."

Mrs. Reagan had been suffering from poor health in recent years, at one point breaking several ribs after a fall inside her Los Angeles home in May 2012. In June 2014, Mrs. Reagan was seen visiting President Ronald Reagan's grave in a wheelchair.

Early Sunday morning, Mrs. Reagan's stepson and the adopted son of President Reagan and first wife Jane Wyman, Michael Reagan, confirmed the news on his official Twitter account. "I am saddened by the passing of my step mother Nancy Reagan," he wrote. "She is once again with the man she loved. God Bless..."

Nancy Reagan was born Anne Frances Robbins on July 6, 1921, in New York City. Following her parents' separation, Nancy (as she was commonly called by her friends and family) moved in with her aunt and uncle in Maryland before eventually rejoining her mother, Edith Luckett, and stepfather, Loyal Davis, in Chicago. (Davis formally adopted Nancy in 1935.)

After graduating from Smith College in 1943, where she had studied English and drama, Nancy Davis went on to try her hand at acting, appearing in several short films and Broadway plays before eventually signing a contract with Metro Goldwyn Mayer Studios (MGM) and moving to Los Angeles. There, Davis met a young Ronald Reagan, also an actor at the time, and, after a quiet courtship, the two were married in March 1952.

Nancy Reagan was heavily invested in a number of causes throughout her life. During her husband's tenure as governor of California, from 1967-1975, Mrs. Reagan became involved in the Foster Grandparent Program, which paired senior citizens with children that had physical and mental handicaps and disabilities. Later in life, after Ronald Reagan was elected president in 1981, Nancy Reagan dedicated her efforts to several other causes, including the "Just Say No" drug and alcohol abuse awareness campaign, which she founded in 1982, and helping to support a controversial bill that mandated minimum sentences for drug offenses. Following her husband's death from Alzheimer's in 2004, Mrs. Reagan became an outspoken proponent of stem cell research.

"Science has presented us with a hope called stem cell research, which may provide our scientists with answers that have so long been beyond our grasp," she said in a speech on May 8. "I just don't see how we can turn our backs on this."

Following a breast cancer diagnosis and subsequent mastectomy in 1987, Mrs. Reagan recounted to Barbara Walters that she had made the decision to go ahead and have a full tissue removal in order to keep up with her busy lifestyle as first lady. "I couldn't possibly lead the kind of life I lead, and keep the schedule that I do, having radiation or chemotherapy, there'd be no way," she said, according to The New York Times. "Maybe if I'd been 20 years old, hadn't been married, hadn't had children, I would feel completely differently [and would have had a partial lumpectomy]. But for me it was right."

Mrs. Reagan also played a small role in the world of politics herself over the years, hosting several GOP presidential debates at the Reagan Presidential library in 2008, and again in 2015.

Following her death on Sunday, public figures from across the political spectrum shared their thoughts and condolences. "My thoughts & prayers are with Nancy Reagan's family and friends," former first daughter Chelsea Clinton wrote on Twitter. "Very sad to learn of her passing."

Laura and I are saddened by the loss of former First Lady Nancy Reagan. Mrs. Reagan was fiercely loyal to her beloved husband, and that devotion was matched only by her devotion to our country. Her influence on the White House was complete and lasting. During her time as First Lady and since, she raised awareness about drug abuse and breast cancer. When we moved into the White House, we benefitted from her work to make those historic rooms beautiful. Laura and I are grateful for the life of Nancy Reagan, and we send our condolences to the entire Reagan family.

Details on Mrs. Reagan's funeral service are still expected to be released, although a spokeswoman stated that mourners should send contributions to the Ronald Reagan Presidential Library and Foundation in lieu of flowers.