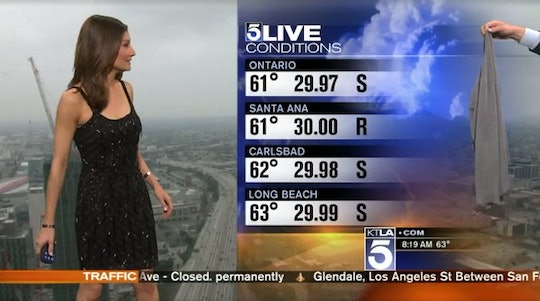 Cloudy with a chance of awkward shaming. A Los Angeles reporter was asked to cover up on air and the internet isn't happy about the misogynistic implications. Liberté Chan, a KTLA meteorologist, was forced to change on live television Saturday morning because her little black dress sparked audience outrage. During the May 14 morning broadcast, viewers reportedly criticized her outfit for being "revealing" in numerous complaints emailed to the local news station. The incident, now being called #Sweatergate on social media, quickly went viral, igniting the internet's ire.

During an innocuous weekend weather report, someone off-camera began dangling a grey cardigan in front of Los Angeles meteorologist Chan on live television. “What’s going on?” Chan asked, initially confused. “You want me to put this on? Why because it’s cold?” She apparently thought this was a gag at first because it was “cold” (61 degrees) in L.A., so everybody should be putting on their sweaters.

Unfortunately, this on-air stunt was not a cute nod to L.A.’s temperature drop. Some viewers, scandalized by the sight of the meteorologist’s bare shoulders, were sending complaints to the news station, and Chan’s co-workers, in their infinite wisdom, decided passing her a sweater on air would silence these sartorial critics.

“We’re getting a lot of emails,” an off-camera male voice explained, before helping the meteorologist into the cardigan (what a gentleman!) to cover up her shameful clavicles.

Chan handled the on-air awkwardness with aplomb, only commenting that the sweater made her “look like a librarian," but many viewers took to social media to express their indignation over the whole misogynistic episode.

Chan took to her social media pages to explain that she was originally wearing a different, “more demure” dress but had to quickly change because that dress was “keyed out”—didn’t work with the green screen—but in my opinion, she was not obligated to justify her wardrobe choices to anyone.

To make matters more ridiculous, Chan actually apologized for wearing the “offensive” dress on air. “I’m sorry if I was inappropriate,” the meteorologist said, adding that she would not wear the dress again. “It was a loaner anyways,” she joked.

Ignoring the fact that it is totally not okay for viewers to police what female reporters wear, who the heck thought it was a good idea to pull this stunt on live TV? They handed her the cardigan in the middle of her report and told her people didn’t like her dress while she was on the air. Her co-workers could have pulled Chan aside after her report and no one would be the wiser. Not only is it humiliating to learn that people are complaining about your clothes, but to have that humiliation broadcast throughout Los Angeles—and now the country—makes it worse.

Later Saturday, Chan posted a video on Facebook of a co-worker reading some of the critical emails KTLA received about her dress. One viewer wrote, Chan “[looked] like she stayed out late at a party and came to work wearing the same dress. Not appropriate for a weather report.” Another viewer said that while they liked Chan “overall,” her “New Year’s Eve cocktail dress is inappropriate.” Adding, “That would have been true even if it was the 10 p.m. broadcast.”

“It’s a dress, people!” Chan exclaims in the video, bringing up an important point. “Can we talk about my weather performance?” Exactly! Female journalists receive far more criticism about their appearance than their male counter-parts. People may joke that all female anchors have the same haircut but there is obviously a reason for it. That is: If it works, it works. Breaking out of the mold, as Chan did here, can be met with serious negativity from viewers.

Not to mention, as a meteorologist, Chan’s wardrobe must not only “please” viewers aesthetically, it must also work with the green screen behind her, nixing several color and pattern options (like blue, yellow, green, pattern, small stripes, and more).

Chan obviously didn’t think of her outfit was going to cause such a stir before the broadcast. She even posted a short video of her excitement while wearing the “revealing” dress on Twitter. “Even if it’s early in the AM, can’t beat a black beaded dress,” Chan wrote.

The episode only served to emphasize the fact that women's wardrobe choices are still considered appropriate topics of conversation and open to ridicule, especially when they are in the public eye like Liberté Chan.

The entire situation probably could have been avoided had everyone handled themselves a little better. Besides, as one Twitter user wrote, when faced with “a lot of emails,” the station should have “[responded] to them with ‘It’s not your business what she wears.’” Amen.