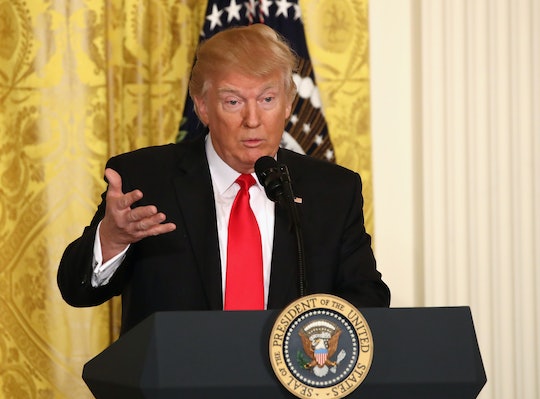 Does Trump Know What The CBC Is?

A black female reporter asked President Donald Trump to meet with the Congressional Black Caucus, and his response was surprising. That's because it sounded as though Trump was not aware of what the Congressional Black Caucus is. The organization has existed since 1971 to represent black members of Congress. The reporter who asked him was April D. Ryan, who has been the White House Correspondent for American Urban Radio Networks since 1997. And it wasn't just that Trump didn't appear to know what the CBC was that was troubling — it's what he said to Ryan that was also shocking.

He seemed not to know what the initials CBC stood for when Ryan asked her question, and was unable to answer until she clarified that she was talking about the Congressional Black Caucus. Then, he said he would meet with them. Trump said "You want to set up the meeting? Are they friends of yours?" which presumed that, because Ryan was black, she must be a part of the CBC or know black people who are. Trump's team did not respond to Romper's request for comment.

You can see how it all unfolded here:

New York Congresswoman Yvette Clarke, a Congressional Black Caucus member, shared her thoughts with Romper about the exchange. "Donald Trump has demonstrated again that he has neither the basic qualifications for leadership nor any concern for the American people."

On Twitter, Jonathan Riley summed up the exchange best:

Ryan's question is crucial because Trump said at the press conference that his administration is directing "the creation of a task force for reducing violent crime in America," citing cities such as Chicago as an example of the plight of inner cities.

Creating such a task force that will directly impact Chicago without input from Congressional Black Caucus members Robin Kelly and Danny K. Davis would certainly limit how effective the task force could be.

For many, Trump's inability to understand that not all black people live in inner cities or in crime-ridden areas has been frustrating. And to top it off, Trump's knowledge of what inner cities is like is far-removed from reality, which he demonstrated at Thursday's press conference when he compared Chicago to the Middle East, CNN reported:

There are two Chicagos, as you know. One Chicago that is incredible, luxurious and safe. There is another Chicago that is worse than almost any of the places in the Middle East that we talk about and that you talk about on the news.

As it turns out, The Congressional Black Caucus took to Twitter to announce that they asked him back in January to set up a meeting, but he never responded.

Maybe they should have asked him on Twitter. At least he would have likely responded.