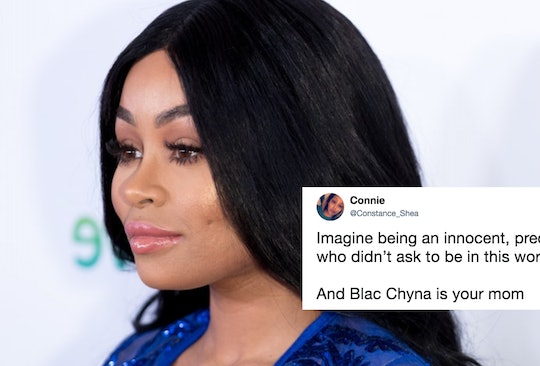 Reports Of A Blac Chyna Sex Tape Have Surfaced & Of Course, She's Getting Mom-Shamed

After Rob Kardashian and Blac Chyna finally settled the custody battle over their 1-year-old daughter, Dream, the famous ex-couple has remained out of the spotlight. However, as of this morning, Chyna is making headlines once again. That's because reports of an alleged Blac Chyna sex tape have surfaced, and of course she's getting mom-shamed.

TMZ reported that a video of Chyna and a mystery man was leaked on Monday morning via an anonymous Twitter account. Chyna reportedly had no part in the release of the explicit video, according to TMZ, and plans on pursuing legal action against the person behind the leak. Needless to say, someone posting a sex tape without the permission of all parties involved is a huge problem, even if Chyna did agree to being filmed at the time.

Another one of Chyna's attorneys, Walter Mosley, took to Instagram to address the sex tape leak, reported The Mirror. "We have to change this culture of abuse and assault against women," Mosley wrote alongside a photo of himself and Chyna, adding:

Today’s post saddens me deeply as it is an attack not only against my client but my friend. Why do we think it’s acceptable to sell, or publish, or seek revenge, or blackmail women in this way and without their consent? It’s not.

It took exactly two seconds for social media to blast Chyna for allowing herself to be filmed during a sexual act. (Never mind that she didn't intend for the tape to be released in the first place.) "How about don't be a whore........then you don't have to worry about your business being on display," one person commented on the TMZ article.

A fair amount of critics took the sex tape leak as an opportunity to mom-shame Chyna, too. "CHYNA SHOULD NOT BE ALLOWED NEAR HER CHILD.....SHE IS NOT CABABLE [sic] OF BEING A MOTHER...." one commenter wrote. (Yeah, because I'm sure no mother in the history of the world has ever done anything sexual before. *Eye roll*)

Another person wrote, "Pretty sure if my mom had a smex tape with some random guy i'd probably kill myself."

"Making her children proud again," yet another person wrote on the article. Another declared, "Mother of the Year."

“I was devastated, of course. I’m like, ‘How could somebody, like, post these pictures of me?’” Chyna told ABC News in an interview that appeared on Good Morning America at the time. “This is a person that I trusted. I just felt betrayed.”

I'm just going to come out and say it: What a woman does in the bedroom has no bearing on who she is as a mother. Period.

Clearly, Blac Chyna did not intend for the explicit video to be leaked. (And even if she did, that's her business.) So can we stop expecting mothers to live up to a rigid set of guidelines? Moms can be sexy. They can pose for nude photo shoots. They can record themselves having sex, if they want. Just because a woman pops out a child doesn't mean she's suddenly an asexual being.

We need to simultaneously stop shaming moms about their sexuality and start acknowledging there's a difference between making a private video and having it leaked without permission.