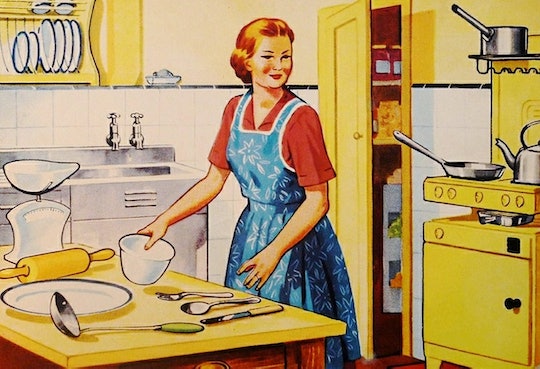 North Dakota Rep Is Stuck In the 1950s

Two lawmakers from North Dakota made headlines last week when they made comments many felt suggested that America take another step toward time traveling back to the 1950s. One representative says women should make their husbands breakfast in bed on Sundays, and people are seriously offended. Two representatives from North Dakota, Bernie Satrom and Vernon Laning, were arguing in favor of a state law that dictates what businesses can be open for business on Sundays. The pair made remarks that many have called sexist and outdated. Romper reached out to both representatives for comment, and heard back from Laning who said the following via an email to Romper:

My being called sexist is one of the milder labels that have been applied to me lately. It seems interesting to me that these people that take offence [sic] at what was intended to be humorous, have no hesitation in sending out very vile and offensive comments themselves. The word hypocrite comes to mind.

My comment was intended to be humorous sarcasm regarding the further relaxing of our blue laws. I still feel to have 4 hours per week set aside to allow employees a chance to attend church or just relax would not be a detriment to business. People do not have more money to spend just because there are more shopping hours available.

Maybe it would have been more acceptable to use the term “our money” instead of my money but I somehow doubt it. All of my colleagues I have talked to and my wife of over 46 years laughed about the remark but it seems many people have forgotten how to laugh and prefer to lash out against anyone that doesn’t share their exact views. My wife enjoyed it enough to send it out over Facebook to many of her contacts. So it seems the ones that took offence [sic] weren’t even referenced in the remark.

Learn to laugh - life is easier.

The Blue Law, as its known, is one of many such laws that have existed throughout the U.S. since colonial times. The purpose of the laws is to restrict businesses from selling goods or providing services on Sunday — the Sabbath (or day of rest) in many religions. North Dakota's laws have become a little less restrictive in the last few decades, but there are still many places that aren't allowed to do business on Sundays. Many in the state would like to see it repealed.

It was during a discussion of a repeal that Satrom and Laning stood up in defense of the Blue Laws. Beyond reiterating the religious foundation upon which the original laws are based, Satrom went a step beyond and made a pretty pointed suggestion about what he believed people ought to be doing with their free time on Sundays:

Spending time with your wife, your husband. Making him breakfast, bringing it to him in bed and then after that go take your kids for a walk.

It would have been bad enough if Satrom had been merely making light of the argument by offering the antiquated suggestion of a wife waiting on her husband hand and foot — but he was actually serious. The sexist remarks didn't end there (and they rarely do); Laning then chimed in and attempted to jokingly call out his wife for spending all of "his" money:

I don't know about you but my wife has no problem spending everything I earn in 6 and a half days. And I don't think it hurts at all to have a half day off.

The comments were met by audible laughs from other members of the house. While the sexism was unnerving enough on its own, many North Dakota citizens were equally if not more concerned that the remarks about subservient wives seemed to be the representatives' sole justification for defending the law in question.

When confronted by local media about the comments, Laning told a reporter from Valley News Live that he thought people were taking the remarks too seriously, and that maybe people "lacked a sense of humor." Regardless of intention, we're living in a time when women's constitutional rights and the religious rights of many are under threat. At the highest level of the U.S. government there lies uncertainty that those in power are taking their jobs seriously, so it shouldn't be that difficult to understand why people might not find humor that relies on the oppression of others to be particularly amusing.