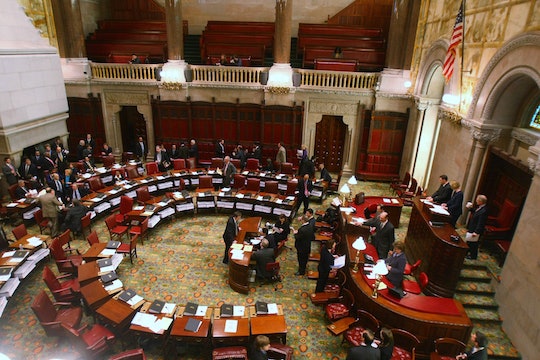 On the CBS political satire Braindead, rabid infighting among the Senate is reaching a fever pitch, and the government is constantly facing a total shutdown. Meanwhile, nobody's doing anything about the epidemic of alien bugs who are eating people's brains. Sound familiar? Aedes aegypti may not have arrived here via a meteor, but it's an eerie case of life imitating art. Back here in the real world, Republicans are blocking Zika funding — not because they've been taken over by extraterrestrials — but because they'd rather defund Planned Parenthood and fly Confederate flags at veterans' cemeteries. Confused yet?

The Centers for Disease Control and the National Institutes of Health have used up almost all of their Zika funding, but Congress can't agree on how to get them more money, because each bill arrives on the floor riddled with its own type of parasites: nongermane (another word for irrelevant) amendments that have little or nothing to do with actual subject of the bill. "Republicans were more interested in attacking Planned Parenthood and flying the Confederate flag – can't make this stuff up, that's really the truth – than protecting women and babies from this awful virus," said Senate Minority Leader Harry Reid, according to CNN. So why are they wasting time with this nonsense? How is it even allowed?

Incredibly, the Standing Rules of the Senate only require that amendments be germane, or relevant, in a few very select cases, such as general appropriations and budget measures, or when cloture is invoked. The Senate can unanimously agree to germaneness requirements as it sees fit. Why it doesn't see fit to do so now, when Florida currently has 80 pregnant citizens infected with Zika, and the CDC is warning pregnant women to stay away from Miami-Dade county, I couldn't say. The House, meanwhile, adopted Clause 7 of rule XVI, also known as the "germaneness rule," in 1789. It provides that "No motion or proposition on a subject different from that under consideration shall be admitted under color of amendment." Seems pretty reasonable, right?

The Senate could have a germaneness rule, too, if it wanted to. Article 1, Section 5 of the U.S. Constitution holds that "Each House may determine the Rules of its Proceedings." Current Rules Committee members include failed presidential candidate and Texas Sen. Ted Cruz on the right, and New York Sen. Chuck Schumer on the left, in case anyone feels like writing an angry letter. So why doesn't the Senate have a germaneness rule? According to the Congressional Research Service, "The right to offer non-germane amendments is extraordinarily important" because it affords senators the opportunity to basically force everyone to listen to them. If a senator introduces a bill that goes nowhere, they can just tack it on as an amendment to another bill that's already up for a vote. Essentially, it's like putting up with an obnoxious celebrity friend who always disagrees with you and makes you late to parties, because they're the reason you got into the party in the first place. In short, this country is bananas. Wear bug spray.