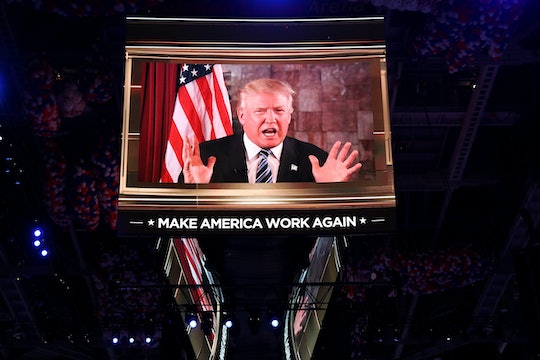 When it comes to any political convention, you have to laugh on some level. Because it is theater, no matter what party you associate with. The Republican National Convention memes that have been circulating on social media are pretty on point. They show how divided America is, and especially those that associate with the Republican or Democrat party, are right now. On one side, given the speeches and social media response, it seems like Republicans aren't ready to talk about anyone who is "Other" with any respect, whether it's Black Lives Matter, Muslims, or everyday Democrats. Meanwhile, Democrats are mocking Republicans mercilessly for any slight they perceive.

After two days of the Republican convention, the message was very clear from the Trump campaign: Republican candidate Donald Trump and his supporters are very against the Democrats, Democratic frontrunner Hillary Clinton in particular. In just two days of convention speeches, voters heard a lot of rhetoric about terrorism. And terrorists. And immigrants and how immigrants might be terrorists. Or take "American jobs." It's getting very heated.

The Republican National Convention has been all about ideology. But, who knows? Maybe the Democratic convention will be, too. The memes and jokes on social media that have circulated about the convention and the Republican platform illustrate just how nasty everyone is capable of getting when it comes to politics. So far on Tuesday, many are still mocking Melania Trump for her speech on Monday night, which was believed to have been plagiarized from Michelle Obama's 2008 speech as the then-presumptive first lady. And the jokes get even more partisan from there:

During the Republican convention, the candidate and his spokespeople had a lot to say about where the party wanted to take the country. On Monday night, Pat Smith, who lost her son in Benghazi, called Democratic nominee Hillary Clinton "a liar" and straight up said that she blamed the candidate for her son's death. "I blame Hillary Clinton personally for the death of my son. Personally," she said.

Republican Speaker of the House Paul Ryan spoke at length on Tuesday about what he believed Republicans should be voting against. "Middle class security is not just a memory," he said. "The Republican party stands for the great alternative, evolving party... Let the other party go on and on with their constant dividing of the people. Everyone is equal. Everyone has a place. No one is written off. Because there is worth in every life. And if [Republicans] don't defend it, who will?"

But judging from social media and the jokes everyone was trying to make — it doesn't seem that most of the Republican party, after nominating Donald Trump as a candidate, would totally agree.