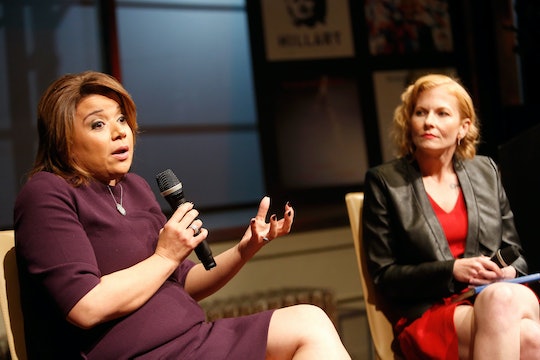 In the final hours before Election Day, public figures are all making their final pleas to voters to get to the polls tomorrow and using the last few hours explain their own reasons for getting behind one candidate or another. One of the most powerful arguments among them is an op-ed by Republican strategist and political commentator Ana Navarro on why she's voting for Hillary Clinton. Or wait, scratch that —Navarro explicitly says that she didn't vote for Clinton, but against Republican nominee Donald Trump.

Navarro is Nicaraguan by birth, but an American citizen who has always been a Republican. In 2008, she was the national Hispanic campaign chairwoman for John McCain and in 2012, she worked for John Huntsman's campaign in the same capacity. But, she wrote on Monday, she just couldn't vote for her party's nominee, because she believes he doesn't represent her Republican values.

Navarro is known for her cutting commentary on CNN, going head to head in sometimes hilariously snarky ways with Trump surrogates on the network's panel shows. But her decision to cast a vote in Florida for Clinton, and the reasoning behind it, is no laughing matter. The state has always been a battleground, and in her op-ed, Navarro states that she couldn't live with herself knowing that she didn't vote. "We each have a right and a duty to make a personal choice" based on our values when selecting a president, she writes.

Overall, Navarro's column is powerful — she writes that she is troubled by Clinton, for sure, and cares about what she sees as some major lapses in judgement during Clinton's time as Secretary of State. "I do care about those damn emails," she writes. But those lapses in judgement, for Navarro, are nothing when it comes to the kind of person Trump is. Navarro lists all of the times Trump proved himself to be not a nice person. Some are ones we all know, like the litany of sexual assault allegations against him or even his lewd and misogynistic comments about (and to) women who oppose him.

Navarro also references her friend's 8-year-old daughter, whose parents are U.S. citizens now, but from Venezuela. "Alessia can't sleep at night. She is afraid that if Trump becomes president, her parents will be forced to leave our country," she writes. Trump has instilled fear in even the littles Americans, who should not be scared that a president would hurt their family.

She also lists the anti-semitism that infects the mood at Trump rallies, the time Trump tried to use an African American's senseless death in Chicago as political opportunity as reasons for voting against her party, and the fact that the KKK endorsed Trump.

But mostly it's his lack of humility, Navarro writes:

I voted against Donald Trump because I am a deeply flawed person of faith. If I went into a confession booth right now, I'd be in there for hours. I believe in the redemptive need to admit mistakes, express regret and ask for forgiveness. I have done it too many times to count. The thought of a powerful leader who lacks the basic humility to admit error and ask for forgiveness — not even from the God he professes to believe in — astounds me.

There are many reasons that Navarro lists for not being able to get behind the Republican candidate, but much of it echoes what the Clinton campaign, and Clinton's surrogates, like the Obamas, have been saying about Trump all along. Navarro is worried about Trump's character, his temperament, and his ability to always go low when he's questioned.

We'll see how many Americans — specifically her fellow Republicans — agree with her soon enough.