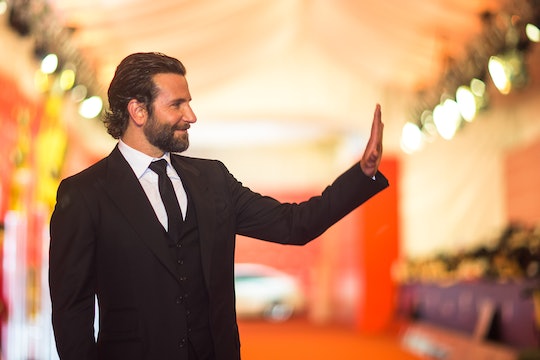 Republicans Are Mad Bradley Cooper Was At The DNC, & The Reason Is Ridiculous

On Wednesday, President Barack Obama gave the keynote address of the third night of the Democratic National Convention in Philadelphia, Pennsylvania. While not as much of a Hollywood hotbed as the White House Correspondent's Dinner, the DNC is known to be a gathering place for a number of progressive actors, musicians, and celebrities. While Susan Sarandon, Meryl Streep, Paul Simon, and many more stars were in attendance this year — Republicans are mad Bradley Cooper was at the DNC. Wait, what?

So Cooper's DNC appearance probably would have been a non-issue, if the camera didn't keep panning to his reactions during Obama's speech. Cooper looked kind of bored every time the camera cut to him — stoically dashing, but still bored. Now, why would Republicans lash out at Cooper sitting in the DNC audience at the Wells Fargo Arena? Because freedom. Because America. Because American Sniper. No seriously: Republicans got mad at Cooper because he played the role of real-life U.S. Navy SEAL Chris Kyle in last year's film American Sniper.

Um, Bradley Cooper is not Chris Kyle. Like, two totally different people, one of whom was murdered in 2013. (It was Kyle.) And let's try and remember that American Sniper was not a documentary, either. And yet... *insert heavy sigh* Well, Twitter kind of blew a collective GOP gasket last night:

See, Cooper does this thing called "acting" — here, I'll let Sir Ian McKellen explain it better from his guest appearance on the U.K. version of Extras — as this "acting" concept appears to be lost on some Republicans.

Let's just do a quick recap — and apparently necessary reminder — of the all things and/or people Bradley Cooper is not:

Here are some things that Bradley Cooper actually is: Cooper is a proud Democrat who's donated to Hillary Clinton in the past. Cooper is a former drug addict and alcoholic. Cooper's father died of cancer in 2011 and as a result, he has become a champion for cancer research. He's even registered as a bone marrow donor.

Now, according to Republicans who can't separate real life from the movie screen, here are some people Bradley Cooper might be: Owen Wilson, Christopher Walken, and even former president Bill Clinton:

I can see how it might get confusing, especially when you get lost in those stunning blue eyes of Cooper's. But then again, if people really believe that Bradley Cooper was actually the living embodiment of Chris Kyle, then maybe they really believe that GOP nominee Donald Trump is really a successful businessman capable of having access to our nuclear codes, too.