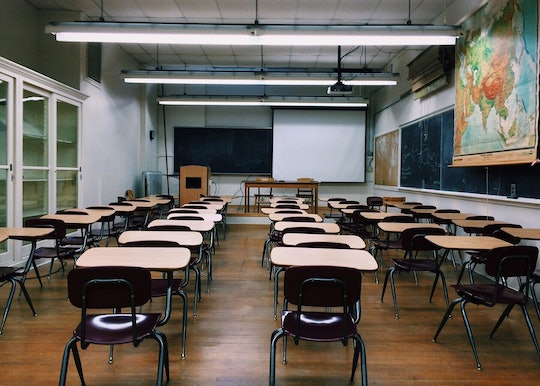 One of President Trump's big campaign promises, as far as education was concerned? To do away with the Common Core, a controversial set of math and English standards adopted at the state level first published in 2010, according to USA Today. Many opinions have been shared about why Common Core is supposedly good or bad, but few studies seem to actually exist about its effectiveness. Research on standardized testing does exist though, and it helps to shed some more light on the debate about the current state of Common Core. Whether you agree with the idea of curriculum standards, there's no question that standardized testing is a majorly hot-button education issue.

One thing that seems clear about understanding the debate around Common Core is that it appears inextricably linked to the controversy that also surrounded 2002's No Child Left Behind Act (NCLB) introduced under President George W. Bush. According to USA Today, NCLB introduced regular standardized testing of students on a yearly basis between grades three to eight, and then at least once between grades 10 and 12. The move was meant to increase education quality and to reduce racial inequality — well-intentioned ideas, to be sure — but mostly it just led to an awful lot of backlash over the perils of judging teacher and school performance on the basis of standardized tests.

Unlike NCLB, though, the introduction of Common Core wasn't actually about school performance, but more about universal curriculum standards — a practice that has been proven to be successful in other countries, including those in Asia and Scandinavia. The Common Core effort was always one that existed at the state level — and it still does — but in 2009, the federal government began supporting the program by offering grants to states that had adopted it as part of President Obama's Race to the Top grant program. The problem? Not only were educators and parents already concerned about the implications of standardized tests, many were also becoming concerned that the Common Core standards felt an awful lot like an attempt by the federal government to call the shots about education.

The current GOP-led disdain over the Common Core today mostly focuses on the notion of the standards as an example of government overreach —  Education Secretary Betsy DeVos claimed following her confirmation, for example, that she felt Common Core "got turned into a federal boondoggle," according to Newsweek. But perhaps the more pressing angle is the ongoing concern about standardized tests, and how exactly the education system in America is supposed to ensure that the needs of students are being met, with or without the Common Core.

According to CNN, the concerns about standardized testing in America has meant that, these days, the tests themselves have become almost voluntary. In October 2015, President Obama spoke out against the amount of time and energy being spent on preparing and taking standardized tests, and introduced non-binding guidelines that would limit the tests to "no more than 2 percent" of classroom instructional time. In addition, more and more states have been allowing parents to opt out of this testing on behalf of their kids — a welcome move by many families, who felt like standardized tests were stressing their kids out for little actual benefit to their education.

Teachers, too, have questioned the actual value of constant testing. In a May 2015 report by the Harvard Political Review, Ohio fifth-grade teacher Dawn Neely-Randall spoke about the effect that the continued focus on standardized testing as part of the Common Core curriculum had on her ability to actually help students learn. One major issue? Neely-Randall said the importance of the tests inevitably mean that test preparation becomes, in itself, a lesson that takes up class time which would normally be used for other things.

In the beginning, we were doing all of these great projects and they were fluent readers and writers … and then all of a sudden, I had to stop everything to get them ready for a test.

But Neely-Randall certainly isn't the only one to notice that though. In a 2013 report, the American Federation of Teachers found that as much as 15 percent of a school year's class instructional time could end up being devoted to test prep and test taking.

The question then seems to be, is it worth it? Possibly not: according to an April 2016 Stanford Graduate School of Education study, the achievement gap that NCLB was meant to improve is just as relevant as ever. After analyzing reading and math test scores of an estimated 40 million students during 2009 and 2013, the researchers found large achievement gaps between white students and and black and Hispanic students in "nearly all U.S. school districts with substantial minority populations."

So what should be done about Common Core, beyond the political rhetoric of federal vs. state interference in education? It's not entirely clear, and of course, it's not likely there there is a simply solution. But according to Chalkbeat, many states are trying to at least come up with ideas. In New York, officials have released a draft of new math and English learning standards that are described as an attempt to move away from the Common Core and towards standards that are more developmentally appropriate, and which may also end up relying less heavily on testing. In Indiana, for example, state education officials have scrapped the Common Core entirely.

But that still means that something inevitably has to take its place. While the answers to America's education woes aren't clear, what's also concerning is that there is clearly still a great deal of disagreement over what is needed to bring about education reform in a helpful way. For now at least, it seems safe to assume that the Common Core standards won't be the way in which it's achieved.