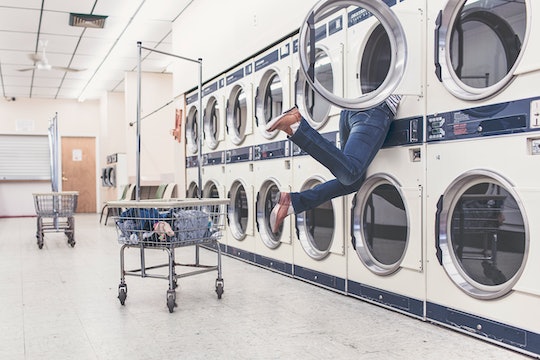 It's hard to shake the longstanding, ridiculous notion that women are somehow responsible for housework, but research shows that the household chore gap is closing. All over the world — so it's no small thing. A team of researchers from the University of Oxford studied housework in 19 countries over the past fifty years and found both men and women are doing more chores. Scandinavian countries and the United States are actually leading the way, too.

It's slow moving, of course. While the researchers found that the amount of work men do has increased, it doesn't match the rapid decline in housework that the women are doing. So there's some change, but it's a slow burn. The Oxford team measured the house cleaning, cooking, and washing clothes, since those are the most traditional chores and the ones that are usually given to a woman and therefore, according to the study, "most resistant to change." It's nice to hear that men are throwing in a load of laundry now and again at least at least in some western countries.

The increase in men doing more housework was notable, but it's not really a reason to celebrate the end of sexism just yet. It's getting better, but the rates of change are very slow.

The breakdown of chores — and what feels natural to certain genders — is as old as gender concepts themselves, so it's hard to see change. But it's important to know who does what and how big the the gender chore gap is, because who's doing what at home (and for how long) matters. Especially as more women work, it's only fair and right that the housework gets split up evenly (or just divided somehow). It's not fair to ask women if they can have it all, when they're really just doing all of the hard stuff.

Another study earlier this year also found that the amount of chores a woman does it influenced by where she lives. So even in a big country, there are tiny disparities in the amount of cleaning and folding women do. It's sort of crazy — even full time working women in "culturally traditional" states, like Mississippi, do more housework than women in New Hampshire. It's all about the value system.

Even though the rates of change are slow, it looks optimistic. It's going to be a long road, but chores aren't gendered — sooner or later everyone will just take that for granted.