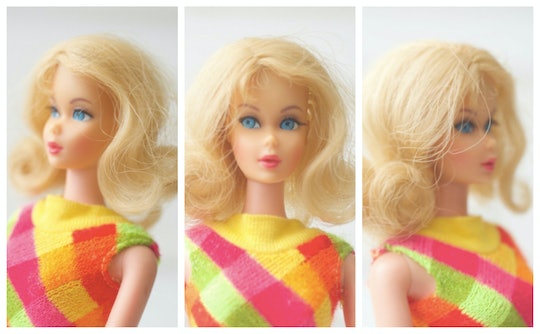 Actually, Barbie Made Us The Moms We Are Today

As a feminist, I’m expected to rail against the impossible portrayal of womanhood Barbie has promoted for decades. I should be denouncing her unattainable proportions and obsession with fashion and boys over personal growth. But the truth is, more than any other toy from my childhood, my Barbie made me the mom I am today. Playing with an army of 11-and-a-half inch vixens laid the groundwork for surviving the rigor of being a working parent.

Barbie was the only articulated action figure that, supposedly, existed in the real world. The Star Wars figures, which were all male or alien male, save for one (my beloved Princess Leia) were for sci-fi storylines. My brother’s G.I. Joe was a super soldier, which never interested me. My Strawberry Shortcake dolls inspired little other than the desire to huff their heads when my scented markers dried up. Barbie allowed me to play out drama on my own terms. She presented all that was possible in real life, as evidenced by her extensive wardrobe options.

Was I just falling prey to the trappings of a patriarchal society? Was I being groomed to believe that a grown woman’s success is measured by the brushability of her hair, and the stamina to keep a smile plastered on her flawless face? Maybe. But I was never fooled. I knew I was never going to look like Barbie. I could act like her, though.

Playing with Barbies was like glimpsing a future life that was in reach, not because of what she looked like, but because of what her ambitions were. Want to be a pet groomer? Barbie’s got a playset for that. An astronaut? Sure. The star of her own pop performer fantasy? Barbie dreamed big, so I did, too.

I dreamed of making movies. So I went to film school. I wrote and produced and directed shorts, and though, as a woman, I was in the minority among the film students, I never felt like I didn’t belong. At a student film screening, I watched an experimental black and white piece, where the female filmmaker held a Barbie head over an open flame: an act of protest against the male gaze. That same filmmaker chastised me for agreeing to shoot a guy’s film where the main character spends the whole movie pining for an aloof, beautiful woman. Was the film sexist? Sure. Was the filmmaker sexist for asking me to be his director of photography? No. And did the Barbie-head filmmaker get asked by any male students to shoot their films? No again.

Is it too easy to claim that boys' toys were empowering while the single-most beloved toy given to girls in our childhoods was problematic? Was it Barbie's girly look, or our tendency as kids to perform nurturing behavior through her, that seemed so regressive? Because for many kids, she stood in for male characters, and she was about "spicy inter-family conflicts." She was also about "the Dead Pit."

For me, she was about confidence.

I recognized what confidence as a mom looked like: I had conjured it up decades ago on the floor of my bedroom.

The genesis of my self-belief, planted in me during my childhood, was me play-acting with my Barbies. I haven’t always operated from a place of strong self-esteem, as life’s unexpected turns into break-ups and battles with body image disconnected me from the once firm belief in my ability to create my own happiness. Then I became a mother and I realized that even though I often didn’t feel that I knew how to be the parent my baby needed, it was imperative that I summon that confidence. As experienced parents and older family members dumped loads of advice on me in the early days of motherhood, the only way to navigate through was to trust I knew what was best for my baby, and for me, and for us as a family. I recognized what confidence as a mom looked like: I had conjured it up decades ago on the floor of my bedroom.

I can’t be a mom without my confidence, even if I need to fake it. When I’m worried that my kids hardly ate any vegetables with dinner all week, I remind myself I have more chances… they will eat dinner again.

When I see my sixth grader practically falling asleep doing her homework, I am confident in my decision to instruct her to pack up her books and go to bed, because I’m her mother and I know she needs rest more than annotating another reading passage at that moment.

When I refuse to share my stance on cell phones for tweens with fellow moms, it’s because I’m not interested in their opinions; I am confident in mine (at least, for now).

I do not look like Barbie. I do not drive a hot-pink minivan. I am not outwardly perfect, though I’d argue Barbie isn’t either (the brushability of her hair was short-lived). But I am a student of Barbie. I learned from playing with Barbies how to map out my future, and then build it.

I’m a writer, a producer, a director. And a mother who is so grateful her daughter isn’t getting rid of her own Barbies any time soon.