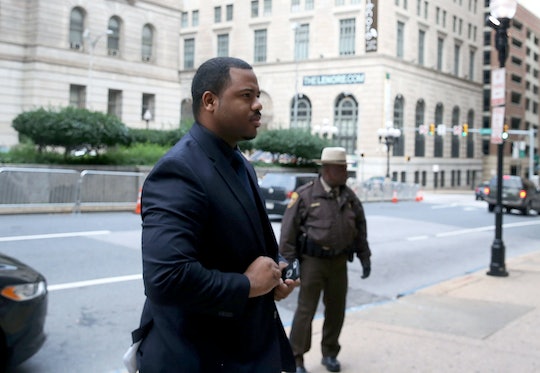 Retrial Date Set For First Freddie Gray Case, Which Ended In A Mistrial

Last week, Officer William Porter's trial ended in a mistrial, but it seems he will be headed back to court soon. Porter, who is one of six officers to be charged with the death of Freddie Gray, will be retried in June. According to WTOP, his trial will start June 13 and will take place after all the other officers face their own trials, which also means it is unlikely prosecutors will use Porter as a witness in any of those trials, as was originally planned. Baltimore City Circuit Court Judge Barry Williams set the trial date after meeting with prosecutors and defense lawyers.

In April, Gray was arrested after fleeing from police. After being cuffed and shackled, he was then placed in a transport van but was not secured by a seat belt, which — according to the police department — was a violation, according to the BBC. Gray died as a week later after sustaining a fatal spinal injury, which he acquired while in the police van, according to the BBC. As a result, Porter, 26, and five other officers face several charges including involuntary manslaughter, second-degree assault, misconduct in office, and reckless endangerment in Gray's arrest and death.

That said, the case against Porter — and his peers — centers on his failure to take action (i.e. he did not follow Baltimore Police Department rules on placing seat belts on those arrested and seeking medical care if/when requested), The L.A. Times reports. The Baltimore Sun notes that Porter's defense attorneys have argued that Porter did not know how badly Gray was hurt and that he acted reasonably. The attorneys also cited that Porter — who didn't personally arrest Gray — did tell his supervisors Gray needed medical attention. But prosecutors disagree. They are seeking to prove that Porter is guilty of negligent wrongdoing.

After the April riots that occurred after Gray's death was announced, Porter's attorneys questioned whether he can get a fair trial in Baltimore. Judge Barry G. Williams apparently believes there are jurors who can be impartial, but the issue could surface again, according to The L.A. Times. Whether or not Baltimore jurors are impartial, Porter's second trial could end much like his first. However, according to the National Center for State Courts, when juries cannot reach a unanimous verdict and prosecutors retry the case before another jury, they win about 70 percent of the time.

Porter has plead not guilty on all accounts, as have his colleagues. However, if found guilty, Porter faces up to 25 years in prison, according to WTOP.